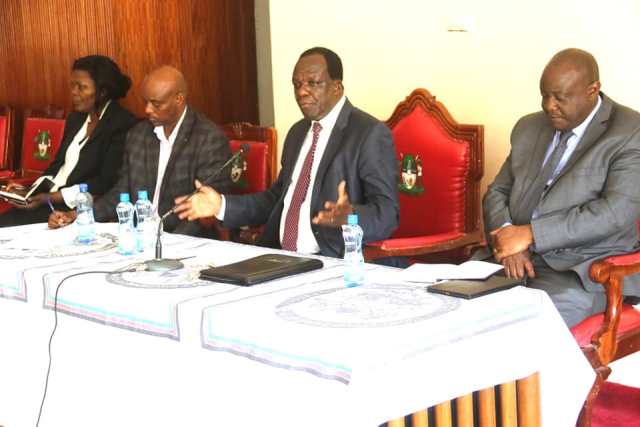 H.E. Governor Wycliffe Ambetsa Oparanya today hosted a delegation from the national government led by County Commissioner Jaldesa Abdirizak for a brief on the Mashujaa Day national celebrations, from the county steering committee, to be held at Bukhungu stadium, Kakamega County on 20th October 2018.

H.E. the Governor said the event is a privilege to the people of Kakamega and urged the residents to use the opportunity to engage in meaningful business ventures during the period. He said he was committed to ensure the celebrations are successfully held and promised to work with the national government on the same. “Having served as a Minister in the Grand Coalition Government under H.E. President Mwai Kibaki, I am well conversant with the operations of the government and therefore understand what is expected (of us) to ensure the celebrations are successful,” he said. H.E. the Governor also used the opportunity to introduce Mr. Jonathan Kisaka, a new entrant in the Kakamega county government service, as the new Head of Security and Enforcement. Governor Oparanya said Mr. Kisaka who was seconded to Kakamega by the national government, following a request by the county; has a vast experience in operations of the police service and will assist the county in training and equipping the county enforcement officers with the skills required to the standards of a disciplined force. The Governor announced that his government has put on hold phase two construction Bukhungu stadium to allow the preparations to go on smoothly.

County Commisioner Jaldesa Abdirizak thanked H.E. the Governor for the good relations and cooperation between the county and national governments and expressed optimism that the County Government under H.E. the Governor’s leadership will work hand in hand with the national government to accord the Mashujaa day preparations the much needed support. Some of the issues discussed included the Transport and Road network, Hospitality industry and Security among others.