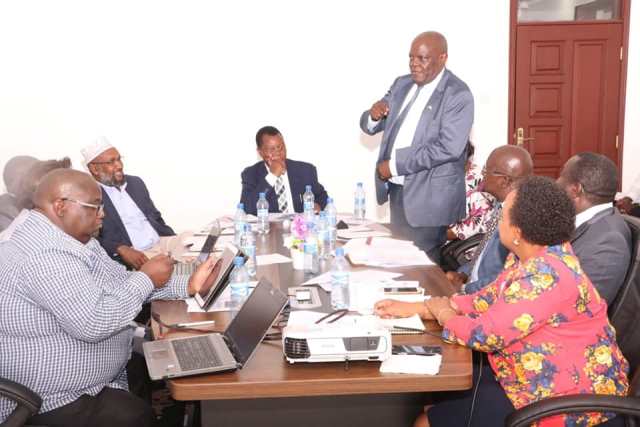 A majority of residents of Kakamega and Vihiga counties living near and around the Kakamega Tropical Rain forest prefer the forest to be fenced to prevent further destruction of this important natural resource by human activities. This is according to a report by an Environment Impact & Social Assessment team presented to the national steering committee chaired by Kakamega deputy governor H.E. Prof. Philip Museve Kutima today, at the deputy governor’s boardroom, County headquarters.

According to the report, which is awaiting approval of the National Environmental Management Authority (NEMA), the forest is on the verge of extinction if the current human activities persist unabetted in the coming few years. They include; food and firewood collection, grazing, fetching water, timber extraction and logging among others. “The demand for land due to the increase in population by the indigenous communities is also a threat to the survival of the forest as families continue to encroach on to the forest land illegally,’’ Mr. Peter Njiiru, an Environmental Social Impact Assessment lead expert said.

Part of the forest land is home to so many families such as the Ikuywa and Shiru settlements both inhabited by locals; learning institutions, the Shikusa Rehabilitation facility and the Agricultural Society of Kenya- Showground (ASK) which are government owned as well as the Nyayo Tea zones. “We are committed to conserving the country’s only remaining tropical rain forest and we are glad the locals have been receptive to the entire process as highlighted by this report,’’ said the deputy governor. He directed the team of experts to see to it that all stakeholders including the Members of County Assembly (MCAs) and residents are incorporated in the implementation process.

“The counties of Kakamega and Vihiga through the respective governors have already committed some funds towards conservation and utilization of this resource indicating the goodwill in our leadership towards the same,’’ he added. Kakamega County where the 120kms long forest largely lies committed to allocate Kshs. 100 million in phases while Vihiga agreed to give Kshs. 30 million.

The Chief Administrative Secretary for Environment Mr. Mohammed Elmy who represented the Cabinet Secretary Hon. Keriako Tobiko expressed the commitment of the national government in conserving the forest terming it a very key resource to the climate of the region and nation.

Mr. Kassim Were the CECM for Trade, Industrialization and Tourism, who was also in attendance, said his ministry plans to establish a snake park and an Eco-lodge in the forest for tourism purposes once the electric fence has been erected. “We have also thought of introducing nature trails and cable cars in the forest so that tourists can have a peculiar aerial view of the entire forest and its ecosystem,’’ he added.

Some of the recommendations proposed to enable locals continue using the forest even after fencing were; connection of water pipes from the forest to the homesteads around the forest, provision of access gates to the forest where necessary and a coordinated management of use of the forest, among others.