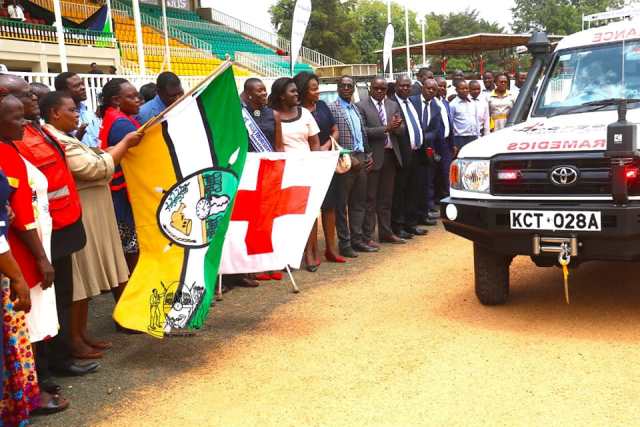 Kakamega County today received nine brand new ambulances from the Kenya Red Cross, fulfilling the part of the agreement that requires total replacement of the mobile rescue and life savers after every five years.

Speaking on behalf of the Governor, H.E. Wycliffe Ambetsa Oparanya, at a colourful function held at Bukhungu Stadium in Kakamega town, the CEC Member for Health Services, Madam Rachel Okumu thanked the Red Cross management and reaffirmed the government’s commitment to the agreement.

In his speech read by the CECM, Governor Oparanya recorded his appreciation to the Kenya Red Cross management for the exemplary services rendered to residents during the first term of the contract as he extended an invitation to the organization to work with the County government to induct the newly employed 400 Community Area Administrators in Primary Health-care, Disaster Preparedness and Finance Management.

Furthermore, the Governor said plans were underway to seal an agreement with the organization to construct a Regional Disaster Management Center in Kakamega County which will offer critical life saving skills, disaster preparedness and management training as well as other services that will extend beyond the Lake Region borders.

The Managing Director E-Plus and Deputy Secretary General Kenya Red Cross, Madam Susan Ng’ong’a said the organisation looks forward to more public-private partnerships with county governments as she thanked Governor Oparanya for his visionary leadership by putting more emphasis on the health sector for Kakamega County. She assured the government of continued mutual partnership in ensuring a healthy county and nation at large.

The new ambulances were flagged off by Madam Rachel Okumu and Madam Susan Ng’ong’a.