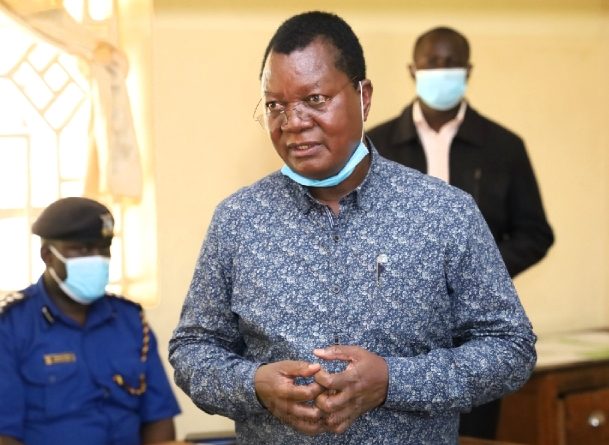 Residents of Kivaywa in Lugari Sub-County Thursday morning woke up to the gruesome news of the death of three night guards at Kivaywa Boys High School who were brutally murdered by unknown assailants in the wee hours of the morning while on duty.

The bodies of Evans Wanyonyi, Henry Khaoya and Edward Wanyama were found within the school compound while another guard, Situma Sitikho, is admitted at the Webuye County District Hospital nursing head injuries. The whereabouts of a fifth guard, Luca Wanjala, who was also on duty are still unknown.

Addressing the school community and residents of Kivaywa and Matete area at the school, Kakamega County Deputy Governor H.E Hon. Prof. Philip Museve Kutima condemned the unfortunate incident and called on all the security agencies to ensure no stone remains unturned during their investigations in search of the culprits.

The Deputy Governor who also delivered the message of condolence by the Governor H.E Hon. Dr. FCPA Wycliffe Ambetsa Oparanya to the bereaved families and the entire school said the Government will coordinate with the school management to ensure security apparatus are installed around the school inorder to help in surveillance and identification of all movements and activities within the school and its environs across the day.

The Governor who is out of the County on official duty said forensic investigations should reveal the cause of the horrible act adding that those found calpable should be booked for a just, judicial process.

“Anyone found taking away another person’s life must be answerable in a court of law and if found guilty be locked behind bars for as long as the law dictates. I send my deepest sympathy to the bereaved families as we plan to stand with them during this mourning and traumatizing period,” said Governor Oparanya.

The school Principal Dr. Tom Shavisa said the perpetrators made away with a television, a laptop and a public address system all valued at approximately Shs150,000.

Kivaywa School Board Chairperson Mr. Amos Chilai thanked Prof. Philip Museve Kutima, the school’s former Member of the Board, for condoling with the Community.

Hon. Nabii Nabwera, a resident of Lugari and an alumni of Kivaywa Boys, who was present to condole with the families commended the County Government for installing high mast flood lights at Matete, Kaburengu, Nambilima, Lwandeti, Kipkaren, Lumakanda among other market centres in Lugari Sub-County, making the areas much safer than before. He termed the incident an isolated case and urged members of the public to volunteer leading information to the police for apprehension of the killers.