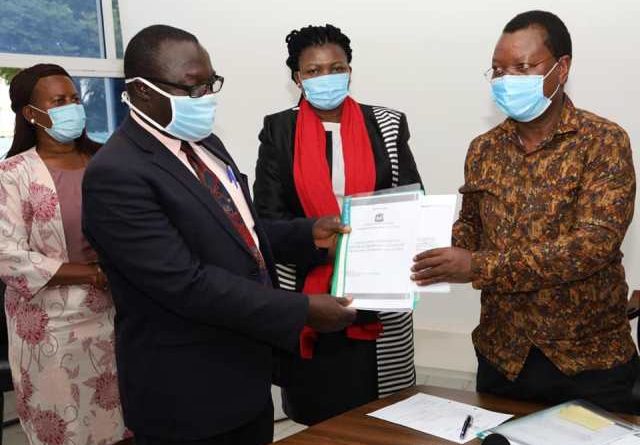 Mr. Kassim Were Ali, the new CECM for Social Services, Youths, Sports and Culture, took over the mantle from Hon Robert Kundu Makhanu. Through his Chief Officer, Mr. Fanuel Angaya Wemali, Mr. Were handed over his former docket of Trade, Industrialization and Tourism to Mr Alfred Ouya Matianyi. Mr. Joseph Obonyo Indire who has been on the driving seat at the Education, Science and Technology handed over operations of the ministry to Dr George Akolo Lutomia who previously was in charge of ICT, e-Government and Communication.

“We must redirect our energies towards achieving excellence in all sectors for the benefit of the residents. Let us serve the people diligently to our satisfaction and that of our boss, H.E Governor Oparanya,” Prof. Kutima said.

He added that the CECMs should be appreciative to the Governor for retaining them in his Government.

He reminded the senior officers that the powers to appoint and dismiss them squarely remains at the Governor’s discretion.

“I have worked with most of you very well and as Chief Advisor to the Governor, l can disclose to you today that the County’s CEO has an enormous task on his shoulders which is to deliver his manifesto to the people of Kakamega. We have no option but to roll up our sleeves and support him tirelessly” he said.

The Deputy Governor instructed Chief Officers, who are the accounting officers in the ministries, to provide information to their incoming bosses on among others; status of stalled, ongoing and completed projects, staff establishment, financial reports and an asset register.

“Staff training and promotions must also be taken into account going forward to ensure employees advance in their careers,” he directed.

The exercise held at the Deputy Governor’s boardroom also saw Mr. Baraza Wangwe receive the nod to assume duties officially as the Ag. CEO of Kakamega Microfinance Corporation, an office formerly held by his successor at the Ministry of Water, Environment and Natural Resources Mr. Phanuel Kulati Wangia.

Chief Officers and other senior officers from relevant ministries also attended the ceremony. The program continues this Friday.