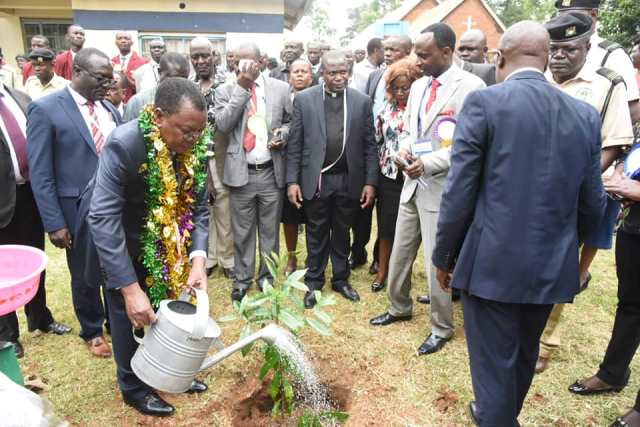 Local contractors who fail to complete government projects within the stipulated timelines risk being blacklisted for future government contracts.

The deputy governor was reacting to concerns by the school that a dormitory whose construction began in September 2017, and was expected to end in October 2018, is yet to be completed. The dormitory fully funded by the county government to the tune of Kshs. 19,780,000 is expected to address the serious congestion problem in the existing dormitories.

“It is unfortunate that this contractor has gone to court and obtained an injuction stopping the County government from re-tendering the project,” he said quoting the remarks from governor Oparanya’s speech which he delivered on his behalf.

The deputy governor said Governor Oparanya’s administration, which he also serves as the CECM for Agriculture, Livestock, Irrigation, Fisheries and Cooperatives, has invested in education at both ECDE, primary, secondary & tertiary levels despite most being functions of the national government. For instance, he said, 226 ECDE centres have been constructed in Kakamega at a cost of Ksh. 402.5 million to provide a better foundation for the young school going children. In addition to that, the County has funded construction of facilities in both primary and secondary schools to the tune of Kshs. 118 and 228 million respectively.

“We have also built centres of Excellence at a cost of Kshs 466 million with the sole aim of improving the performance of our children,” he said.