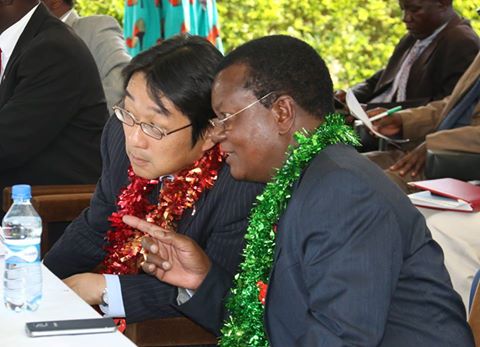 It was pomp and color today at St. Anne’s Girls’ Primary School in Mumias West Sub-County when the institution hosted a representative of the Japanese Ambassador to Kenya at the function Minister Mikio Mori and Kakamega County Deputy Governor H.E Hon. Prof. Philip Kutima at a ground breaking ceremony for the expansion of two dormitories. The Projects have been granted Kshs.8.2million by the Republic of Japan under the program Grant Assistance for Grassroots Human Security Project, to enable the construction of the two dormitories that will see 200 girls be accommodated at the school and spur better results in their academics.

Addressing the gathering, Mr. Mikio Mori said The Republic of Japan encourages the community to work together for the successful completion of the project adding that Kenya is the largest recipient of Japan’s Official Development Assistance (ODA) in sub-Saharan Africa since 1963. Mr. Mori said that Japan has emphasized cooperation in education for promoting human security. Mori informed the gathering that the next Tokyo International Conference on African Development (TICAD VI), the first ever in Africa, will be held in Kenya this coming August and that it will further strengthen the ties between Japan and Kenya.

His Excellency Prof. Philip Kutima thanked the republic of Japan for its sincere initiative in matters education in Kenya and commended St. Anne’s for the exemplary performance both in the county and national exams. The Deputy Governor said the County Government will continue to invest in education for a self reliant society. Professor Kutima was quick to point at St. Peters Road tarmacked by the county government, which goes past St. Anne’s primary school adding that plans to put up Nabongo Level 4 Hospital at Boma grounds are complete and that the project will soon commence.

The other speakers extended their gratefulness to Japanese Ambassador to Kenya Tatsushi Terada and his representative at the function Mikio Mori for the grant, saying it will go a long way in supporting the education of thousands of pupils who will pursue their primary level knowledge at St. Anne’s Girls’ Primary School Mumias. They include Hon. MCA of Mumias Central Suleiman Odanga, Mumias West Sub-County Administrator Godfrey Mukoya, Deputy County Commissioner Philip Soi and the School’s BOM Chairman Jacob Otinga.