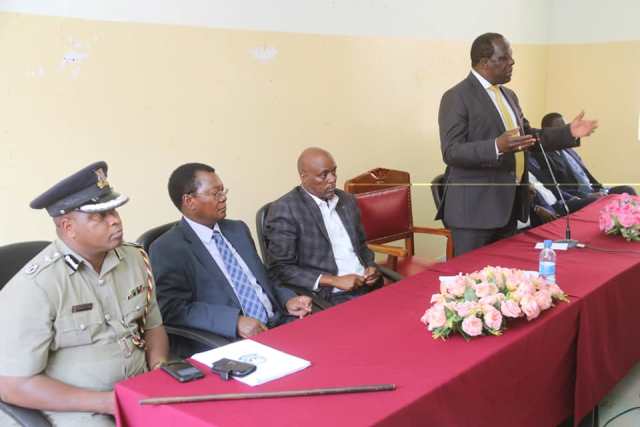 Governor Wycliffe Ambetsa Oparanya has called on government officers and law enforcement agencies in Butere sub county and the entire county to quickly rein in cases of insecurity and apprehend the perpetrators.

Speaking in Butere after a County Security Committee meeting at the Assistant County Commissioner’s office, Governor Oparanya said security is a collective responsibility that requires efforts from both members of the community and the law enforcers. The Governor called on the police and other security agencies to employ decisive techniques of acquiring information from members of the public in a friendlier manner that will build trust between the two and encourage disclosure of more other crucial information from the members of the public to government agencies. He called on residents to report cases of rape to the relevant authorities for action to be taken against criminal elements engaging in such beastly acts.

Resolutions passed during the meeting were as follows;

▪ Disco Matanga stands suspended from now onwards.
▪Operations of the Bodaboda sector should be organized and managed well. Issue of their licencing to be addressed to ensure only the licensed ones are operating.
▪Government officials from both levels of government and police to curb stock theft menace which is prevalent in the sub county.
▪NO rape case should be solved in a kangaroo court. All rape cases should be reported to relevant government offices and the perpetrators arrested and prosecuted.
▪A crackdown on unlicensed (illicit) liquor in the sub county to be carried out.
▪All stakeholders i.e Police, Administrators and the community should work together to ensure criminal elements are identified and dealt with.
▪There being no police station at Sabatia, which is a business hub of Butere town, the County Government of Kakamega will construct a police post at the fast rising Sabatia market. The national government on the other hand will deploy police officers at the station once the police unit has been constructed. The land will be provided by the Member of Parliament through CDF.