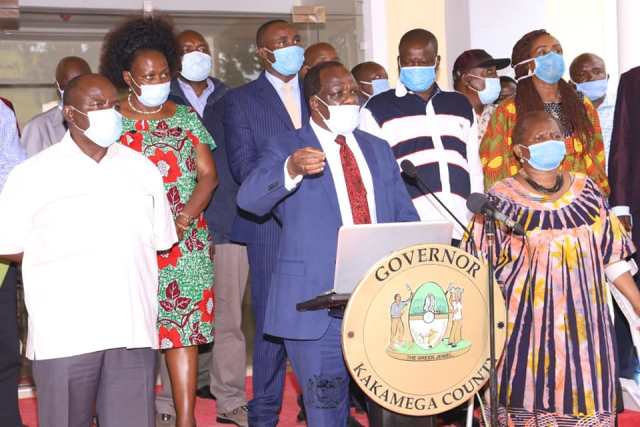 Council of Governors (CoG) chairman, H.E. FCPA Wycliffe Ambetsa Oparanya has told President Uhuru Kenyatta not to agree on a proposal by the National Treasury to reduce county allocation.

“The proposal by the national treasury to reduce almost Ksh. 46 billion for county governments from the exchequer implies the national government is not appreciating our efforts as counties in fighting Covid-19,” said governor Oparanya.

Speaking during a Kakamega County leadership meeting Friday at the County headquarters, the governor lauded the national government for releasing Ksh 8 billion to help vulnerable people who have been under the elderly programme and Ksh 500 million for People Living with Disabilities.

In the meeting, the leaders agreed that all bodaboda riders in the county should comply with measures put in place by the Ministry of Health among them wearing masks and carrying one passenger.

“We have also agreed to ban market days but people are allowed to visit markets any day. However, they should adhere to Government regulations. Manufacturers of PPEs especially masks should ensure they meet KeBs standards,” he said.

Governor Oparanya warned people who defy curfew hours will be arrested and quarantined at their own cost. He however urged security officers not to use excessive force while enforcing government regulations.

“Sellers who sell their products on lorries should have their agents at the market to store the products. We will not allow business people to sell anything directly from their vehicles at the market place,” he said.

The governor asked all leaders not to politicize the fight against Covid-19.

“We have agreed to have inter-county borders manned where people entering our county will be screened,” Oparanya said.