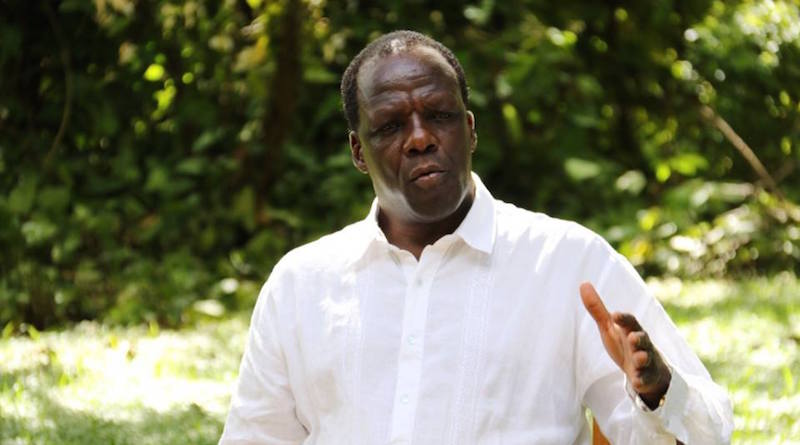 Governor Wycliffe Ambetsa Oparanya was resoundingly elected as the first Governor of County Government of Kakamega during the elections of 4th March 2013. He was the Minister of State for Planning, National Development and Vision 2030 in government of President Mwai Kibaki. Oparanya holds a Bachelor of Commerce (Accounting option) and an MBA (Finance) from the University of Nairobi and is currently in the process of completing his PhD (Economics) at the University of Dar- es- Salaam, Tanzania. He is a Certified Public Accountant and a member of the Certified Public Accountants of Kenya (ICPAK) as well as numerous other professional bodies. Hon.Oparanya has 23 years experience in local and international Finance Management, Audit and Business Consultancy.

As the former Member of Parliament for Butere constituency, his area of jurisdiction had one of the best Constituency Development Fund record in the country. It is on this remarkable streak that the Governor rode all the way to victory gaining more votes across the board compared with the senator, women representative and other politicians who contested for posistions in the county. positions contested for. Kakamega people demonstrated  a lot of trust in him and showed that he is capable to deliver as the first Governor of this great county. ‘Now that work has begun, I will endeavor to implement my manifesto to reward my people’s overwhelming trust,” he said.

About 56 per cent of the people of Kakamega County are poor. While it has good climate, reliable rainfall, good soils and manpower, the county still reels in high poverty levels. An estimated 84 per cent of the population in the county relies on agriculture as their mainstay.

“In the short term (10 years), we are going to focus on agriculture by building structures in the sector. Agroindustry will drive the region’s industrialization which is why starting next financial year, we will pump 10 per cent of the budget into agriculture,” The governor’s plan for the sugar industry is to revive it while at the same time ensuring that the county diversifies its agriculture.

The Governor has met the Managing Directors of West Kenya Sugar Company, Mumias Sugar Company and Butali Sugar Mills Company to discuss the way forward for the sugar industry. Cane takes 16 months before harvest yet families have to survive in between. The Governor indents to establish ways of helping farmers get alternative income for sustenance through diversification.

Dairy, horticulture and fish farming will be given particular focus. Coffee grown in Lugari and Likuyiani will be key to empowering farmers alongside tea, which is grown in Shinyalu, Ikolomani and Khwisero. “Employment is very critical in contributing towards alleviation of poverty. We shall develop strong structures in agriculture to deliver employment opportunities,”

County Polytechnics will be equipped, profiled and rebranded as the first step towards promoting skills acquisition among the youth. Hon. Oparanya’s government will seek to train the youth on not only acquiring competitive skills in the job market but to develop their capacity to create employment.

Foreign investors from China have expressed willingness to support the government in this area. In the long run, capacity will be developed progressively to the national polytechnics upwards to university level to ensure youth possess the highest quality of technical skills.

To underscore the importance of systems to promote commerce within the county, every sub county will have at least one modern market. The informal sector run by small-scale traders will be formalized and business owners will be much easier to track. This will not only ensure focused efforts when it comes to giving them training on basic business skills, it will enable them to stand a better chance at acquiring bank loans.

“We are straight away starting with a record 14 markets, one in every sub -county and two in Kakamega Town because of its size. The long-term plan is to relocate all the markets from the CBD in order to maintain the town clean,”To stimulate the economy at every corner of the county, the government will also support the cottage industry in every constituency right from furniture business to the juakali sector. These efforts are targeted towards alleviation of high unemployment rates. Soft loans from the county ministry of trade and affordable loans from banks will be given to traders as credit to start and grow their enterprises.

Sub- county, ward and village administrators will be used to ensure that we profile all the youth in the county. We will be able to ascertain their individual abilities, level of education and what they can do for the county.

Infrastructure development within the county will take up Kshs. 1.8 billion of the budget. The county will also engage with the national government to improve the road network. The construction of the Kisumu-Webuye road has begun and we shall partner with the government to ensure the dual carriageway is replete with street lighting.

Kakamega town has transformed in the past three months with the streets looking clean and well lit. Oparanya launched a program to clean the town even as he instituted measures to ensure that all the towns in the county follow suit and are sustained in cleanliness. A beautification program will follow where flowers will be planted, grass lawns manicured and solar powered street lights installed to improve the aesthetics of the major urban areas. CCTV surveillance will be installed in the CBDs to improve the security system of the towns. In line with Schedule 4 of the constitution, Oparanya’s government will engage the police to manage traffic within the towns.

The main challenges facing his government is developing a human resource composed of staff who are willing to work hard to deliver services to people of Kakamga County. “The culture of former municipal council workers has been very different. Weak financial controls in the past and untrained employees, some of whom have been working for over 20 years without training is something we must tackle,”

Oparanya contends that expectations are high and his government is expected to come up with solutions to problems affecting all his people. The transition period has not made things any easier since money for devolution has not been availed by treasury on time. Officers of the defunct provincial administration have not yet integrated the idea of county governments well and there exists a strained relationship with the county government. “Communication has been very poor and knowing what is happening from the national government has been impossible. Devolved functions have not all been accorded to the county government because of inexplicable delays,”

He says the suspicions that governors were extravagant and lavish spenders are not true for all governors and looks forward to promoting a healthy relationship with other elected leaders. Already, a forum that brings together the governors of Vihiga, Bungoma, Busia, Trans Nzoia and Kakamega is geared at ensuring that development is achieved for the region as a whole.

At the end of his first five-year term, Hon. Oparanya is confident that all the Millennium Development Goals will have been realized. “All the Sub- county hospitals will be very well equipped and the referral hospital will be refurbished and adequately equipped. We shall employ more nurses and clinical officers,”

“By 2015, hunger will have been eradicated in the county completely. HIV, maternal and child health will also be catered for in my reform agenda in the sector.”