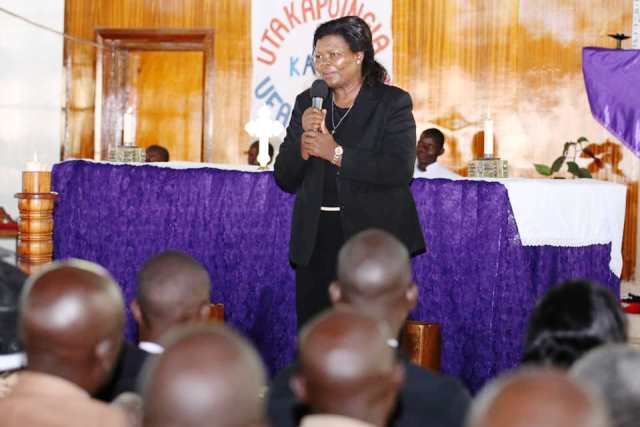 Dozens of family members, friends and County government officials today attended a requiem mass for the late Rems Manegene Warui who until his death about one week ago was the County Head of Security and Enforcement.

The service conducted by the father in charge of St. Joseph Kakamega Catholic Church saw several senior County Government officials attend and pay glowing tributes to the late Warui who joined the County Government after retiring from the Kenya Police Service at the rank of Commissioner of Police in 2018.

In her remarks, the County Secretary and Head of Public Service, madam Jacinta Aluoch Odhiambo described Warui as a disciplined and hard working public servant.
“He was a confidant of H.E. the governor but this did not deter him from keeping his distance in the interest of quality service delivery to the citizens of Kakamega County,” she said.

CECMs Geoffrey Omulayi of Finance and Planning as well as Robert Makhanu of Social Services, Youths, Sports and Culture, were also in attendance.

In his remarks, the Acting Chief Officer in the department of Public Service and Administration, Mr. Lawrence Omuhaka who was also the chairman of the Late Warui’s funeral committee, said the officer’s death was a big blow to the County government and the Enforcement Unit in particular.

The Chief of Staff, Mr. Robert Sumbi said the late Warui used to work long hours including weekends without showing any strain.

“He was a great team leader to his staff and colleagues,” he said.