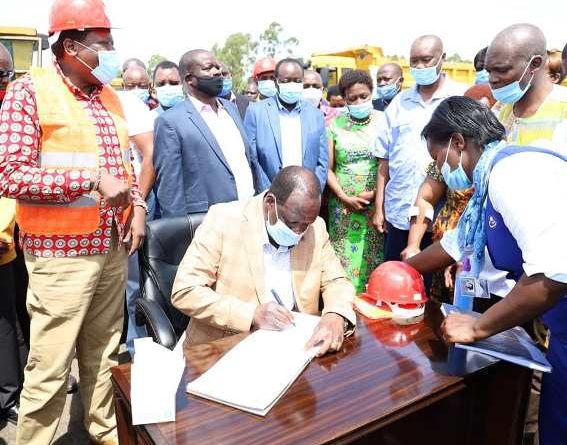 Kakamega airstrip will soon be expanded to handle international flights and cargo planes. This was announced Saturday afternoon by Kakamega Governor H.E. Wycliffe Ambetsa Oparanya during a groundbreaking ceremony of the 1.3km long airstrip.

“This is an important asset to the economy of this county and region. Its expansion will boost local businesses and connect the region to the world,” Governor Oparanya said.

The governor revealed that the National Government will relocate and compensate residents living around the airstrip to pave way for its expansion to airport status.

The upgrade that will be conducted in two phases will cost the government Kshs. 174 million in the first phase, that will include rehabilitation of the 1.2km runway. In the second phase, the track will be expanded to 2km.

“We have more projects lined up for this region as highlighted during our recent meeting with President Uhuru Kenyatta including reviving stalled projects,” he said.

Next week, the governor added, a meeting has been arranged with Transport CS James Macharia to discuss the compensation modalities and the second phase expansion of the airstrip.

Devolution CS Hon. Eugene Wamalwa said the Government is committed to ensure Kakamega airstrip meets international standards to serve the Western region and reiterated that the families neighbouring the airstrip will be fully compensated.

Selina Gor, Kenya Airports Authority (KAA) Western Region manager said the project is one of the major projects they are undertaking as an agency.