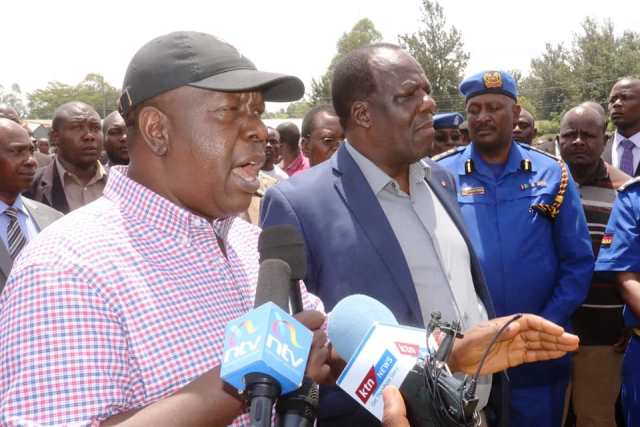 The Cabinet Secretary for Interior, Dr. Fred Matiang’i has said a major security operation is underway in Matungu Sub County to flush out criminal gangs that have been terrorizing area residents and other sub counties of Kakamega County.

Addressing a crowd on arrival on board a police chopper at Harambee Market in Matungu this afternoon today, the CS who was flanked by Kakamega governor, H.E. Wycliffe Ambetsa Oparanya, said the recent crime wave in the area will be met with massive response from security agencies including the General Service Unit (GSU).
“Our security agencies will act with the same resolve as we did in Mt. Elgon to ensure lasting peace in this area” he said.

Governor Oparanya welcomed the CS and noted that nearly a dozen people had lost their lives in the hands of ruthless criminals while others died in revenge attacks by the citizens.

Immediately after his brief address, Dr. Matiang’i left for Matungu Sub County headquarters in a long convoy of vehicles to address wananchi and thereafter proceeded to Khwisero Sub County.