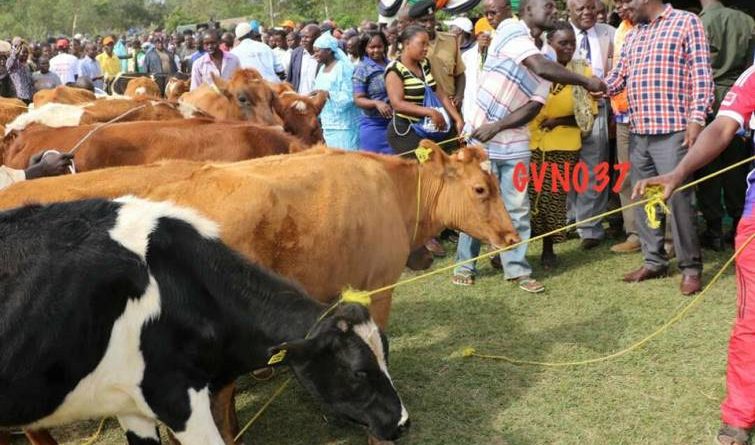 Governor Wycliffe Ambetsa Oparanya has called on residents to diversify crop farming and agriculture as a whole.

Speaking in Ikolomani and Khwisero, Governor Oparanya reiterated his government’s resolve and commitment to better the lives of residents through introduction of improved farming techniques and alternative agricultural practices such as dairy and tea farming, chicken rearing, banana farming among others.

The Governor said his government is determined to rid Kakamega of poverty if the policies and structures being laid down are firmly observed and implemented. At Imalaba in Ikolomani, while giving out grade cows to farmers, the Governor explained that Ikolomani was and is still the sub county ranked with the lowest number of grade cows in the whole County followed by Shinyalu hence the government’s decision to distribute the cows to third phase of the One-Cow Initiative Program in the two sub-counties (affirmative action).

Later on, the Governor commissioned a highmast flood light as well as Khwisero Polytechnic and procedeed to inspect on going renovations at Khwisero Hospital now being elevated-by the County Government- to a Level lV hospital. He as well inspected on going tarmacking of Khwisero-Akatsa road.

The Governor ended his day by commissioning a Ward office at Burma, Kisa West Ward where he called on residents to put aside their clan differences and tribal affiliations by electing development minded leaders in this year’s general elections.