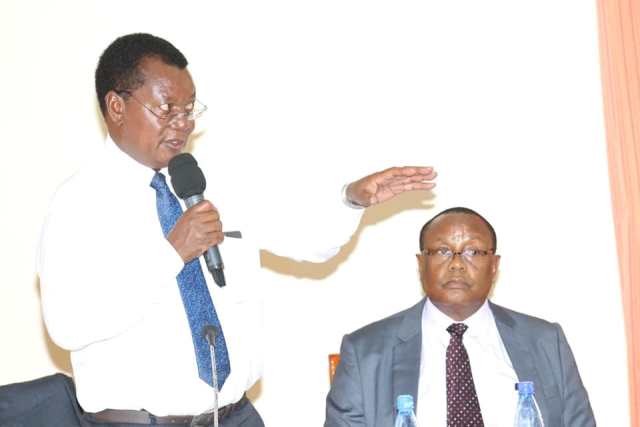 Government officers have been directed to keenly but urgently address audit queries that may have been raised by the office of the
Auditor General (AG) touching on their respective departments or ministries.

This was said today by deputy governor H.E. Prof. Philip Museve Kutima during his address to government officers and other key
stakeholders at the weekly revenue collection meeting, Golf hotel, Kakamega.

The deputy governor explained that the audit queries do not necessarily
imply that money has been misappropriated but is simply a way by the
AG’s office to seek explanation on issues that may have
been identified by the office.

“As required by law, we have to appear
before the Public Accounts Committee (PAC) led by H.E. the Governor and for that reason, you have to expeditiously handle issues directed to your dockets that may have been highlighted so that we present facts to the committee when that time comes,” he said.

Prof. Kutima also urged the office of the municipal manager for both Kakamega and Mumias municipalities to
prioritize issuance of the government owned modern kiosks to the
business people who have committed their funds by paying for that
particular service.

“Just like we have tasked the Ministry of
Environment to ensure all markets in the county conform to the
required standards of cleanliness as our quick plough back strategy of
the revenue collected from these markets, delays should not also be
occasioned in allocation of kiosks after payment has been made by residents,” said
Prof. Kutima.

During the meeting Madam Nora Owako, a Senior Manager for Mpesa Regional Operations with the leading mobile communication service provider, Safaricom, through an invite from the CECM for ICT, e-government and
Communication Dr. George Lutomia had an opportunity to respond to respond to various concerns from the government side mainly touching on the
provider’s network and outdoor Advertisement as a revenue collection
stream.

The donation received by the deputy governor H.E. Prof. Philip Museve Kutima and handed over to CEO of the agency, Madam Beatrice Memo, bringing the number of new motorcycle at the disposal of the revenue collection unit to 8, after H.E. the Governor Wycliffe Ambetsa Oparanya recently received 6 new vehicles purchased by the county government that have so far been assigned to various sub counties to boost revenue collection.

The CEO Madam Beatrice Memo on her part expressed her pleasure and commitment to full utilization of the machines to enhance collection of revenue in the County.