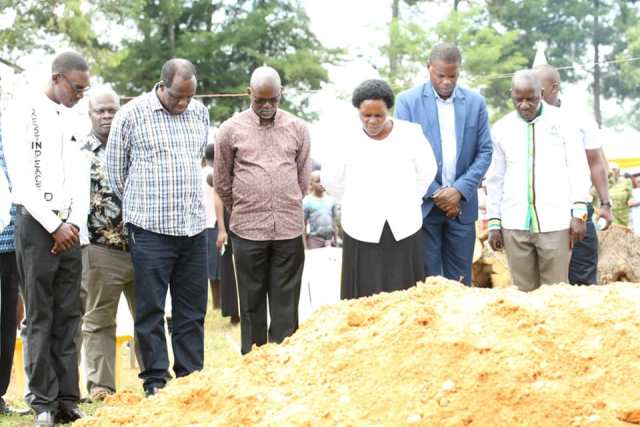 Kakamega Governor and Chair Council of Governors, H.E. FCPA Wycliffe Ambetsa Oparanya has assured county residents access to affordable electricity in their homes before the year 2022.

The Governor who was in Iranda village, Marama West, Butere Sub-County today at the send-off ceremony of the late Mzee Gilbert Aponga Lubanga said the county government will begin installation of power transformers in all the 60 wards, a programme he said will be implemented in phases.

“We are committed to lighting the entire county by connecting 100 homes to a single electricity power source. This program will be implemented concurrently with the water programme popularly known as “Amatsi Khumukuru” , where you will access clean piped water at your doorsteps,” he said.

In education, the Governor urged all ECDE Committee Members to ensure that government programmes on enhancement of early childhood education, including supply of furniture and learning material as well as teaching staff, are on course.

He thanked farmers for the high uptake of government’s subsidised farm inputs and their efficient use of government’s farm machinery which he said had boosted county agricultural production.

He however reminded farmers to register in time in readiness for the next phase of the programme to be rolled out soon.

On Mumias Sugar Company, Governor Oparanya said he held a meeting with President Kenyatta on Friday in Nairobi where they explored several possible ways of reviving the miller which, he remains optimistic would usher in higher production capacity than previous years.

Politically, Governor Oparanya thanked the Kibra electorate for responding positively to his message to elect Imran Okoth as their Member of Parliament in the just concluded by-election. Oparanya expressed his joy in Okoth’s victory which came after a whirlwind campaign efforts for him in the constituency, as Deputy Party Leader of the Orange Democratic Movement (ODM).

Oparanya challenged the Luhya Community to shun divisive politics and embrace other communities in search for the most coveted office in Kenya – the presidency.

He condemned the shameful events observed in Kibra on Thursday where some Honourable Members from the Western region were spotted hurling stones at wananchi who refused to be bribed to vote for certain candidates.

The Governor said the Kibra election was a yardstick for acceptability of the most awaited Building Bridges Initiative (BBI) referendum and called on Kenyans to turn out in large numbers during public participation rallies before casting their votes.

The late Mzee Aponga will be remembered for donating a piece of land on which H.E. the Governor, built the current Iranda Health Center, when he was Member of Parliament for Butere Constituency.