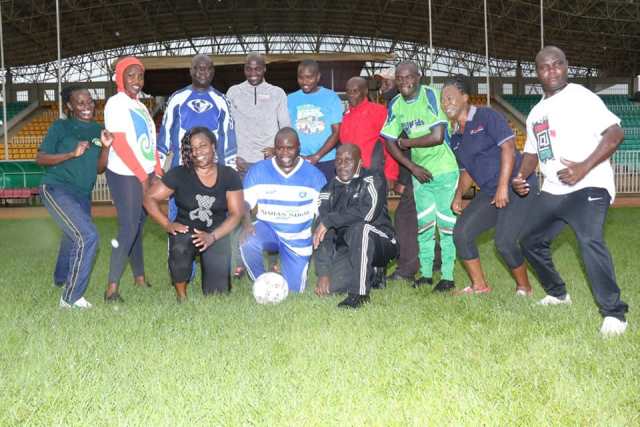 It has been three weeks since Mr. Kassim Were took over as the County Executive Committee Member (CECM) for Social Services, Youths, Sports and Culture.

The CECM whose office is situated at Bukhungu stadium, Kakamega, is leveraging on the ambience of the ultra modern facility; spacious changing rooms,lockable lockers and warm shower among others and has now introduced a weekly training program for his staff at the stadium’s grounds.

“We have initiated this exercising program to keep our bodies in shape and ensure the staff are healthy and motivated; that will definitely increase productivity at the workplace,” he said after a rigorous training with his staff last Friday evening.

The youthful CECM who is also the Western region Patron of Kenya’s soccer giants AFC Leopards, also welcomed all interested County staff to join in the trainings that are held every Friday between 3-5pm.

“We need to select a strong team of staff that will represent Kakamega County in the upcoming Inter-County games and the Governor’s Cup and our preparation will for sure determine the outcome,” the CECM said.

Mr. Were who also supports his local football team, Bumwende FC in Mumias East, encouraged his fellow County Executives to join in the trainings.

“We will soon be organising an Inter-ministerial tournament and l want to challenge my colleagues to present their teams for a thrashing; starting with Hon. Makhanu’s ministry,” he added laughing.