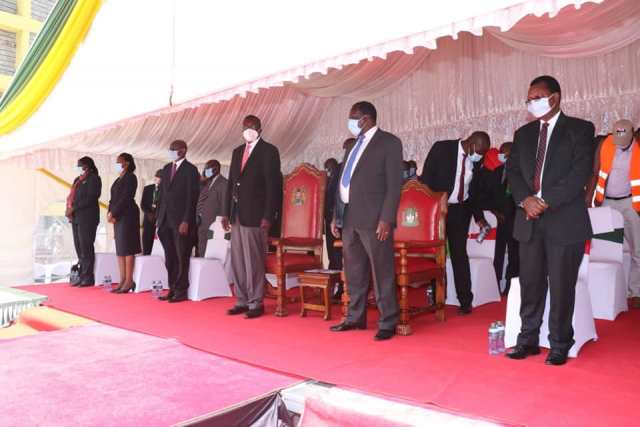 Another milestone has been added to the already great strides of development made in Kakamega as the County witnessed the commissioning of yet another landmark structure; the Kakamega Law Courts in Mahiakalo ward Lurambi Sub-County, an event that was presided over by the Chief Justice David Kenani Maraga and attended by H.E FCPA Governor Wycliffe Ambetsa Oparanya.

H.E Governor Oparanya joined the rest of the speakers in thanking the judiciary for constructing the facility which he said, will go a long way in improving access to justice for the people of Kakamega.

“As you open this structure, l am very pleased that you have also considered our brothers and sisters from neighbouring counties,” Governor Oparanya said.

The Governor noted that the close and cordial relationship between the devolved units and the Judiciary has seen great achievement in law enforcement. For instance, Kakamega County Government has constructed a County court at the precincts of the new law courts which the Governor urged the Chief Justice to aid in its operationalization.

“This will assist in enforcing County laws as cases related to the functions of the County Government will directly be handled at the facility hence decongesting both the High Court and the Magistrate’s courts,” Oparanya said.

The Governor also announced that his Administration will allocate one acre of land in Likuyani Sub-County for construction of a Magistrate’s court. This, he added, will reduce the cost and time taken by residents of the county’s Northern region seeking access to justice.

The Chief Justice and the President of the Supreme Court of Kenya, David Maraga commended the partnership between the County Government and the Judiciary and announced that a Magistrate will be posted at the Kakamega Law Courts to handle petty offences cases.

“Instead of the Judiciary buying land, Governors have at no cost allocated to us parcels of land to construct courts, and for this l have to commend the close cooperation between the Council of Governors and the Judiciary,” he said.

The Chief Justice also directed for immediate deployment of a Magistrate to handle Employment and Labour relations cases within Kakamega County as requested by H.E the Governor. He called on stakeholders to join hands and end the rampant sexual violence incidences in the region.

Deputy Governor H.E Prof. Philip Museve Kutima was in attendance as well as the Chief Registrar of the Judiciary Anne Amadi. Others present were Judges, elected leaders and other senior Government officers.