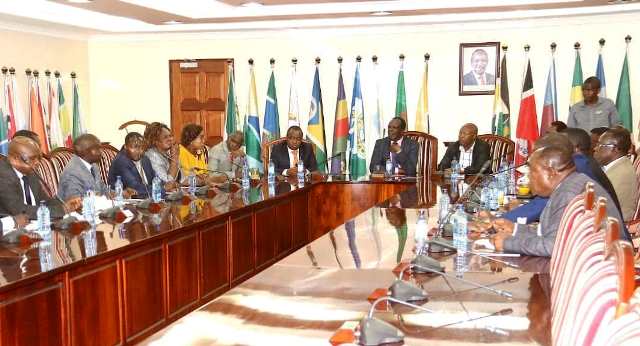 CoG Chair, H.E. Wycliffe Ambetsa Oparanya today officially received Members of Parliament from the Western region in his office at CoG, Nairobi. This was the first such visit since his election into office in January 2019.

He thanked them for their good working relations since his re-election as governor Kakamega County and for their support for the Council of Governors.

He promised to reciprocate the support particularly on matters development in their respective counties and urged them to embrace the national Big 4 Agenda.

“We should be committed to this blueprint within the building bridges initiative (handshake) considering its positive impact on peace among wananchi and economic development,” he said.

When the right time comes, he added, he will seek their support for his ambition for the country’s presidency.

On behalf of his colleagues, the MP for Shinyalu, Hon. Kizito Mugali thanked H.E. Oparanya for his focused leadership and impressive development record, promising the team’s resolve to work hand in hand despite their political affiliations. He said they would do so for the sake of the interests of wananchi who expect delivery of quality services from their leaders.