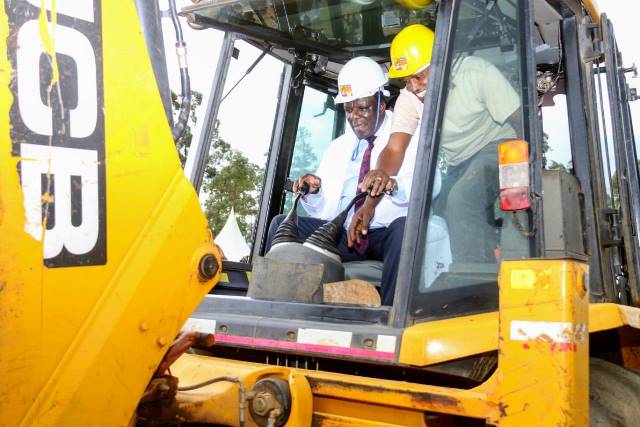 In his address to the residents, H.E. the governor said the project took longer to take off than anticipated due to the lengthy processes involved in identifying and acquiring a suitable location as well as engaging investors to conduct due diligence before committing their valuable resources to the project. Once installed and operational the plant will process fresh milk, fermented milk products and UHT milk.

“As you are aware, there are some individuals who started playing politics with this noble project by questioning the County government’s commitment but my simple and clear message to them is that as a government we will continue serving the people within our mandate”, he said.

The County boss said his administration had intensified efforts to diversify agriculture production as a government policy to reduce over-dependence on mono-crop farming.

Also in the pipeline for construction by the county government is a tea factory in Shinyalu sub county and a Maize milling plant in Lugari Sub county.

The governor urged farmers to join cooperatives saying they provide avenues for farmers to have a say in their leadership and governance structures.

Deputy Governor who also doubles up as the CECM for Agriculture, Irrigation, Cooperatives and Fisheries H.E. Prof. Philip Museve Kutima on his part called on farmers to practice dairy farming with the aim of supplying the milk plant with the vital raw material – milk.

“This milk plant is not only for the people of Malava alone but the entire county and it is my humble request to you to keep dairy cows to supplement our smart farms in supplying milk to this factory once it is operational”, he said. Prof. Kutima added that coolers will be stationed in every ward across the county to act as a milk collection centre before being dispatched to the milk plant.