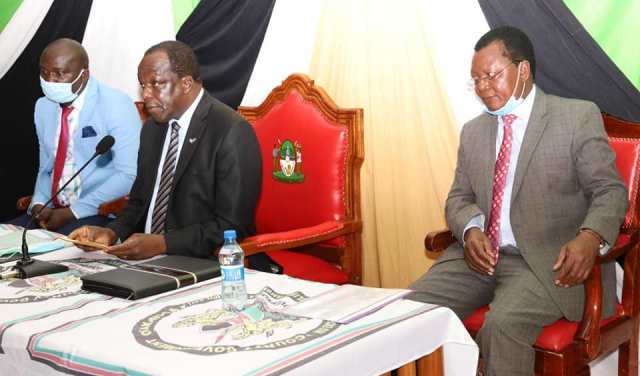 The Senate is yet to agree on the proposed division of revenue formula among counties, a situation that is threatening to cripple activities in the devolved units countrywide.

Currently the shareable revenue is on a 90%-10% basis between the national and county governments respectively. Operating on a Shs. 3 trillion budget, the national government also has the capacity to borrow either internally or externally to implement its projects.

Kakamega county governor H.E. Wycliffe Ambetsa Oparanya has expressed optimism that the discussions currently underway between counties and the national government on borrowing will permit the counties to borrow so as to meet their obligations at the county level, including undertaking major projects.

“You are aware it has taken the Senate over one year to resolve the division of revenue formula and we call upon the senators to pronounce themselves on the new formula,” the governor said.

The county boss who is also the Chair Council of Governors (CoG) called on government officers responsible for managing finances to do so responsibly and diligently to enhance accountability of public resources. “As l talk now counties are owed Shs. 28 billion for the month of June which means we will be carrying over pending bills to the new financial year that we have just begun, a clear picture of the tough times ahead for counties,” he said.

The governor also called on the newly sworn in officers to exercise servant leadership in observance of Chapter Six of the Kenyan Constitution on Leadership and Integrity during their term of service in the government.

Amb. Ochami formerly at the Service Delivery docket was sworn is as the Chief Officer for Finance as his counterpart Dr. Dominic Muteshi assumed the role of Chief Officer at the Public Service & Administration ministry. Madam Catherine Otenyo on the other hand was sworn in as the Secretary and CEO to the County Public Service Board.

CECM for Public Service and Administration Dr. Beatrice Sabana congratulated the three officers and thanked the County Assembly through the Committee on Appointments and that of Public Service for the expeditious vetting process.