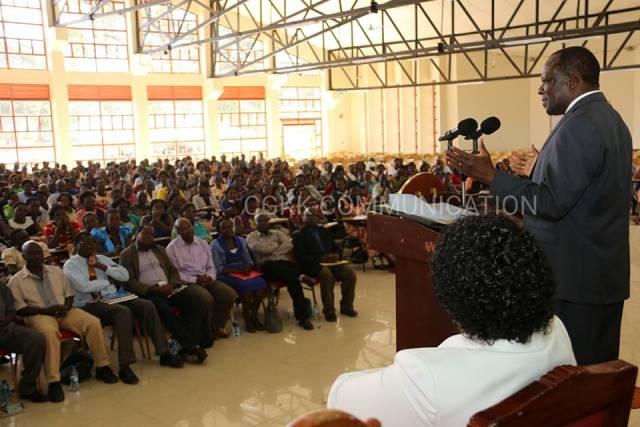 All Early Childhood Education Teachers in Kakamega County are now civil servants. This came to light at the Masinde Muliro University of Science and Technology on Tuesday in a meeting where Kakamega Governor H.E Hon. Wycliffe Ambetsa Oparanya interacted with the newly employed ECDE teachers on government operations.

Governor Oparanya elaborated on government projects and programs in the Education Sector in the county including construction of 147 ECDE Centers across the county, employing 1,900 ECDE teachers, the upcoming feeding program in all the centers and a staff career development and a staff progressive plan among others that aims at making the learning system conducive to all the stakeholders. Oparanya however noted that despite leading in the number of newly employed ECDE teachers under devolution, Kakamega county currently still requires 60 ECDE Centers, 2,100 more teachers and at least 3,000 ECDE Centers to curb the current demand, all which he said his administration is progressively managing.

Other speakers included the County Executive Member for Education, Science and Technology Ebby Kavai, the Chairperson County Public Service Board Rhodah Masaviru, VC MMUST Prof. Fredrick Otieno, County Secretary Dr. Beatrice Makanga Sabana among other invited guests from the education sector in Kenya, all who congratulated the teachers and challenged them to observe integrity in service delivery.

The delighted staff thanked Governor Oparanya for turning round their long term plight into grace saying their monthly ‘salary’ would delay and most of their colleagues died in the same work position and stations without any increment to their pay which did not match their output. The teachers promised commitment and quality service to the children and residents of Kakamega County.

Later in the day, the Governor fulfilled one of his mandate as ODM Deputy Party Leader by commissioning a party office at Webuye in Bungoma County and graced the Kelly Barasa Walubengo Cup tournament finals which was played at Webuye DEB grounds where Kitui beat Malaha 3-1.

Oparanya called on Luhya residents to capitalise on their numbers by registering as voters in their masses and exercise their democratic right of voting for visionary leaders in this year’s general elections.