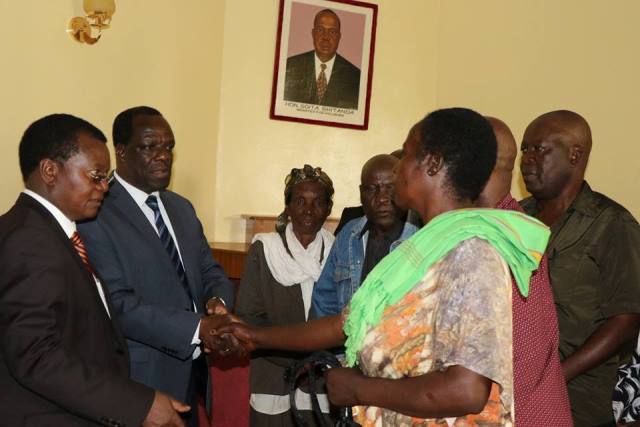 The County Government of Kakamega will meet expenses of the funeral of The Late Hon. Peter Soita Shitanda. This was said today by Kakamega County Governor H.E Hon. Wycliffe Ambetsa Oparanya at Soita’s Kabras home when he went to condole with the family, relatives, county residents and friends, of the former Hon. MP for Malava Sub-County. This, he said will be discussed this afternoon by the Cabinet.

Governor Oparanya mourned his former colleague remembering their close working relationship under the stewardship of The Former President H.E Hon. Mwai Kibaki, where both served as Members of Parliament and Cabinet Ministers.

The Governor further said he will lead the Government in liaising with The National Government, The Agricultural Development Corporation, where Hon. Soita Shitanda was the Chairperson, and other stakeholders, to cooperate with the County program in giving the fallen hero a honorable send off.

The Governor reinforced that unity should prevail during this period of mourning. He asked all leaders and members to political parties to swallow their ideological differences so as to give a befitting burial to the fallen hero. He asked mourners not to politicize this funeral, giving an example of The Late Former First Lady Mama Lucy Kibaki, where politics subsided her last respect from the day she passed on till her final send off. The Governor added that the Late Soita was a peaceful person who wanted to see a united Luhyaland.

Deputy Governor H.E Hon. Prof. Philip Kutima referred to the late Hon. Soita Shitanda as a selfless servant who dedicated his life to this Nation and the people of Malava Sub-County. He was later mandated by The Governor to represent the County in Soita’s funeral committee for coordination of the burial arrangements.