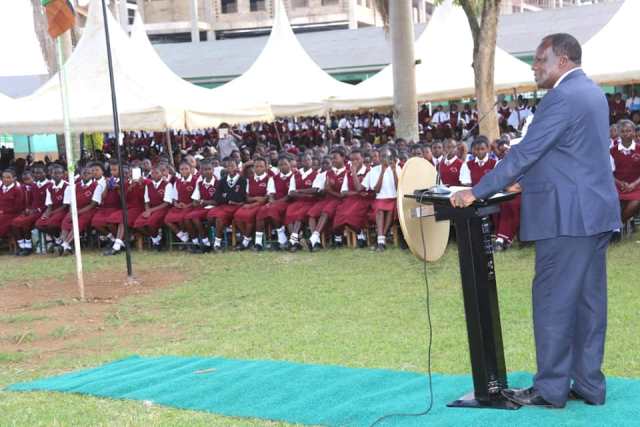 KAKAMEGA county Governor H.E. Wycliffe Ambetsa Oparanya has today challenged learning institutions in Kakamega county to improve their performance so as to better the living standards of the residents.

Speaking at Bishop Sulumeti Girls High School, Shirere Ward, Lurambi sub county Kakamega County during the school’s Annual General Meeting (AGM), Governor Oparanya said his government has invested heavily in primary and secondary education despite the two levels being under the national government because of the passion to improve learning environment.

The Governor said his government has so far spent Shs.510 million to construct and upgrade facilities in secondary schools and employed 545 top up board of management teachers to improve the teacher student ratio in the county. “We have also established 25 secondary school centres of excellence in the entire county and 62 county polytechnics to equip learners with the relevant knoweldge and technical expertise required in the modern world,” he said.

H.E. the Governor added that his government will continue equiping ECDE centres and polytechnics as a way of encouraging young learners and creating job opportunities for them. He officially commissioned the school’s main gate and administration block both sponsored by the County Government of Kakamega.