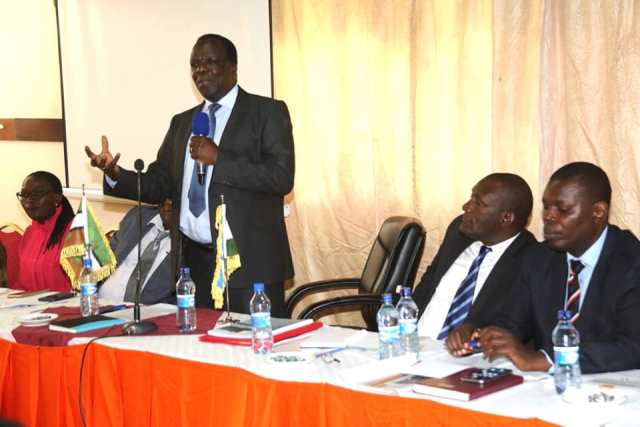 Lake Region Economic Bloc (LREB) Chairman and Kakamega County Governor H.E. Wycliffe Ambetsa Oparanya has intensified efforts on behalf of the 14 governors to have member counties legally adopt and embrace the Lake Region Economic Bloc.
Kisumu County is one of the most supportive counties having disbursed Shs100 million to the bloc in the last Financial year and allocated a further Shs100 million in the new financial year’s budget. Kakamega County disbursed Shs100 million as well.

Addressing youths, people living with disabilities, the national government officials, professional caucus, religious leaders, MCAs, opinion leaders, minority groups and elders, from Kisumu county, among other key stakeholders at Sunset Hotel in Kisumu today Governor Oparanya said LREB was on course towards achieving its core mandate of integrating the region and improving the living standards of its people. “There is a provision by the Constitution for counties to come together for a common purpose and provided the agenda of association does not interfere with the priorities of the various counties, then such partnerships should be embraced,” he said.

H.E. the Governor thanked the Ford Foundation and Ahadi-USAID for supporting activities of the LREB and for showing intention of partnering with the bloc even further. Ford Foundation supported funding of the bloc’s secretariat to the tune of Shs.18 million.
Key priorities for the bloc include establishment of a development bank, protection of water towers and forests, especially Mau, Kakamega and Mt. Elgon,
improvement of maritime transport on Lake Victoria, revival of the sugar industry and a fish factory.

The Governor was accompanied by Kisumu Leader of Majority, Hon. Odhiambo Onyango, LREB CEO Abala Wanga, Chief of Staff Robert Sumbi and Economic Advisor in the Office of the Governor Paul Posho.