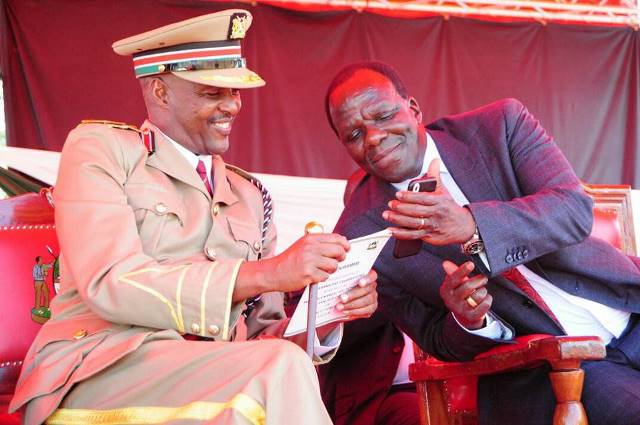 KAKAMEGA county Governor H.E. Wycliffe Ambetsa Oparanya today led residents in marking the country’s 55th year since attaining internal self rule. The celebrations were held at Nangili Girls, Likuyani sub county to conform with the Governor’s policy of taking services closer to the people in the spirit of devolution.

Governor Oparanya paid tribute to the fallen heros’ & heroines who selflessly fought for self rule for their great sacrifice and acts of heroism adding that devolution is one among the many milestones achieved by internal self rule as wananchi exercise their rights of expression and association as entrenched in the constitution.

H.E. the Governor said the milestones achieved by self rule and devolution can be witnessed country wide introducing a development transformative agenda in the counties and the country as revenue sharing is guaranteed by the constitution. He encouraged wananchi to contribute in planning of their counties and suggest projects to be undertaken by their government in order of preference according to their needs. He observed that most flagship projects and milestones achieved by his government such as the 750 bed capacity Kakamega County Teaching & Referral Hospital and construction & equipping of Level lV hospitals in the sub counties as well as introduction of the NHIF cover to provide universal healthcare to residents, the upcoming state of the art Bukhungu stadium and setting up of the county government structure up to the ward and community levels are some of the life transforming initiatives and programmes aimed at empowering wananchi.

Governor Oparanya announced that Kakamega has joined other western region counties to form the Lake Region Economic Bloc (LREB), of which he was the chairman, to economically integrate the region and exploit its potential in Agriculture, Tourism, Health services provision and ICT among others. Some of the counties under LREB are Bomet, Siaya, Homabay, Kakamega, Bungoma, Busia, Trans-Nzoia, Vihiga and Kisumu among others. The governors’ have already signed a legal instrument to be operationalized once respective county assemblies pass the relevant bill. The Governor noted the need for adequate housing in the county to spur urbanization especially in the two major towns of Kakamega and Mumias and announced advanced plans by the county government to construct 1000 homes in the two centres.