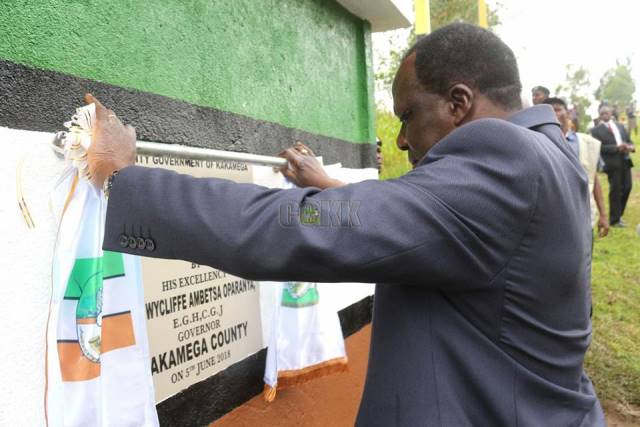 Speaking at Sisokhe Primary School during the World Environment Day celebrations, H.E. Governor Oparanya said the programme that begins in Navakholo sub county will be rolled out in all the sub counties and wards. In addition to piped water, the Governor announced that households will also be connected to electricity to ensure a decent life for the residents.

In relation to the day’s event, the governor said his government has embarked on a drive to conserve the water catchment sources in the entire county. He added that his government has begun a drive to plant 3 million trees with the aim of realizing 20% forest cover in the county and called on the national government to support Kakamega county’s tree planting initiative. He decried the continued illegal tree logging in Kakamega forest and challenged government officials tasked with conserving the forest to jealously guard the only remaining rain forest in the country.

Deputy Governor H.E. Philip Museve Kutima called on residents to support Governor Oparanya and reiterated his keen interest in safeguarding the Governor’s rich legacy after his two terms in office as the Governor.

Host Member of Parliament Hon. Emmanuel Wangwe backed Governor Oparanya for the top most seat in the country after his second term saying the Governor’s development track record for the past ten years should be applied at the national level. His sentiments were echoed by Ikolomani MP Hon. Bernard Shinali.

Other leaders who addressed the residents were Kakamega County Assembly speaker Hon. Morris Buluma and Water, Environment and Natural Resources CECM Mr. Baraza Wangwe among others.