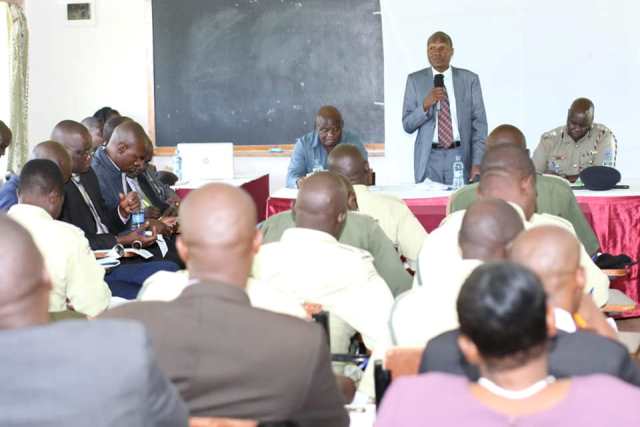 County government enforcement officers drawn mainly from the revenue collection and the traffic units among other sections were yesterday,Tuesday, trained on the best practices to guide them in their normal day to day operations as they discharge their duties to their employer, the County government and the people of Kakamega County.

The one day workshop held at Bishop Stam, Kakamega, saw madam Mildred Wandema from the office of the County Attorney take them through the revenue finance bill as senior officers from the National Police Service led by the deputy County Commander of police Mr. James Ngetich spoke on bailing and bonding as well as enforcement of traffic laws.

Deputy County Secretary Mr. Joshua Kutekha who opened the workshop on behalf of the CECM for Public Service & Administration Dr. Beatrice Sabana said County government officers have to ensure they work closely with their colleagues from the national government a precedent set and strictly adhered to by H.E. Governor Wycliffe Ambetsa Oparanya.

“We are public servants and just like H.E. the Governor works very closely with the County Commissioner and the national government in general, we must ensure we follow the same route so as to assist him deliver his promises and manifesto to the people of this great county of Kakamega”, he said.

Mr. Kutekha called on the officers to internalize the Kenyan Constitution as well as the County by- laws to effectively understand their duties.

The deputy commander of police Mr. Ng’etich on his part said law enforcement has a lot of challenges but assured the officers of support from the national police service officers to ensure the laws are evenly enforced and thanked H.E. Governor Oparanya for fostering cordial working relations between the two levels of government.

The workshop was closed by the director of operations at the County government Mr. Baraza Otunga.