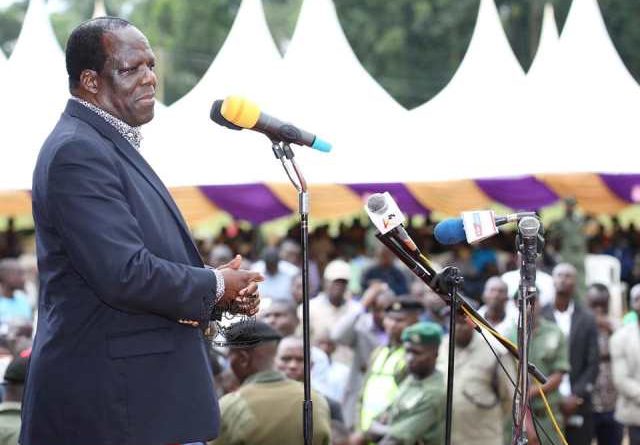 Kakamega Governor and Chair Council of Governors (CoG) H.E. FCPA Wycliffe Ambetsa Oparanya has lauded efforts being made by county governments to transform the lives of residents. The governor further announced that the CoG is coming up with recommendations through the Ugatuzi Initiative to increase allocation of resources to counties to help strengthen devolution.

Governor Oparanya was speaking during the funeral service of the late Adelaide Khalwale at Malinya, Idakho Central ward Ikolomani sub county. “We will soon be coming to you for the 1 million signatures as required by the IEBC before we can present the document to our assemblies for debate”, he said. The governor also used the platform to urge for honesty amongst politicians in the larger Western region. “We have very deceitful leaders who milk our companies dry at night and pretend to be speaking for the people during the day, that has to come to an end”, he added.

H.E. the Governor eulogised the late Adelaide as a hardworking person who championed the wellbeing of her family and society. He called on Dr. Boni Khalwale to work closely with the leadership of the county government saying he had buried the hatchet between them. The governor through the county government has been very instrumental in the funeral arrangements providing both financial and personnel assistance to the family.

Bungoma Senator and Ford Kenya party leader Hon. Moses Masika Wetangula commended governor Oparanya for the easily noticeable positive development track record across the county. He promised to work very closely with the governor in development and political matters both locally and nationally.