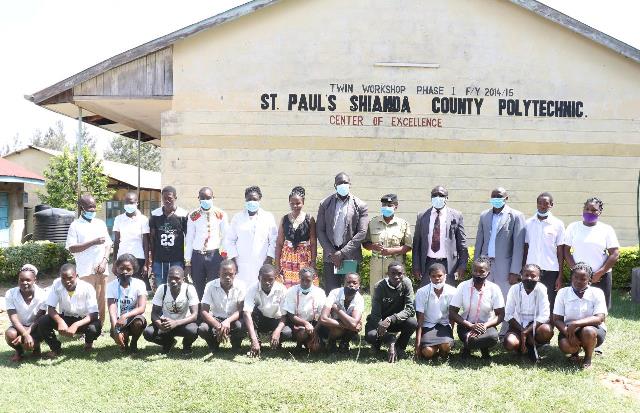 The CECM for Education, Science and Technology Dr. George Akolo Lutomia Tuesday afternoon visited Shianda and Matungu Polytechnics in Mumias East and Matungu Sub-Counties respectively to assess the levels of training offered by the institutions so as to make informed recommendations including award of tenders for production and supply of certain products like improvised modern metal and wooden desks, masks and other garments such as staff uniforms, among others, creating new own source revenue streams.

“What you are seeing here, may not be found outside there when you finally get employed or make your own work stations. The Governor H.E Hon. Dr. FCPA Wycliffe Ambetsa Oparanya has a powerful vision for all the 63 County Polytechnics in Kakamega of becoming industries and therefore sources of employment opportunities for you and other citizens, the reason modern tools and equipment to aid your practicals have been purchased by the Government,” said Dr. Lutomia.

The CEC Member who interacted with the students and their trainers during classwork, congratulated the learners for their choice to seek for the subsidised lifetime skills at County Polytechnics and encouraged them to challenge themselves by going for those courses dominated by colleagues of the opposite gender. This, he said, is a tactic that if well practiced results into direct employment upon successful completion of their courses as the majority gender welcomes their colleagues who enjoy lots of privileges by virtue of being the “minority.”

Dr. Lutomia who was impressed by the increased number of students in County Polytechnics from 3,000 in 2013 to the more than 10,000 learners currently toured several Departments at the Polytechnics namely; Electrical and Electronics, Building and Construction, Fashion Design and Dress making, Hair dressing and Beauty Therapy, Agribusiness, Metal processing, Plumbing, Food processing, TVET and Computers, among others, promising full Government support to the devolved function.