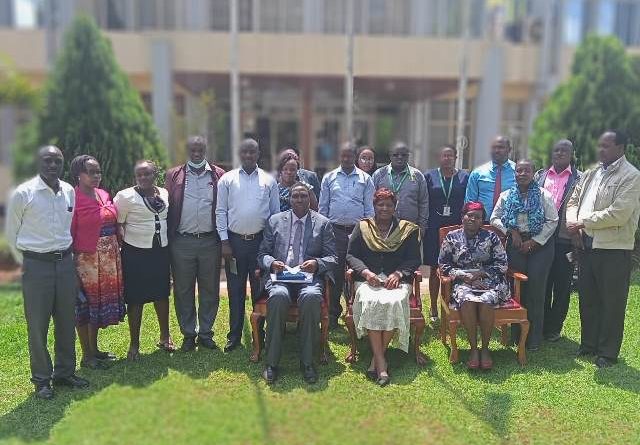 Senior County Government officers from Baringo County, Ministry of Finance, have expressed admiration of Kakamega County’s e-revenue collection technique. The officers, who are in Kakamega County to learn and share ideas and experiences with their hosts in the Finance docket were received by Dr. Beatrice Sabana, the County Executive Committee Member for Finance, Planning and ICT.

Speaking during the meeting held at the Chambers Hall, County Headquarters, Dr. Sabana welcomed the visitors to Kakamega and expressed the Government’s appreciation to them for choosing Kakamega as their benchmarking destination.

She explained that alot of leakages in revenue collection informed the decision by Governor Oparanya’s administration to adopt the cashless payment approach, a method she noted, has immensely enhanced revenue collection across the County.

“Before we centralised revenue collection through the cashless system, the Government was loosing lots of taxes due to leakages; currently the County collects over Shs 1 billion and has a potential of doubling the amount,” she said.

Her Baringo counterpart Hon. Keston Enock said leakages and accountability are the major challenges facing tax collection in Baringo. This, he added, was as a result of the huge reliance on human intervention to implement the system. Baringo County collects Shs 130 million yearly as own source revenue.

“We are interested to learn how Kakamega has integrated the USSD code that clearly indicates every payment made in each revenue stream allowing the users to review the progress of the system,” he said.

Finance and Economic Planning Chief Officer CPA Amb. James Ochami who cited Kakamega as one of the best ranked Counties in revenue collection across the country advised the visitors to ensure their revenue policies are anchored in law for ease of implementation.

Kakamega Chief Revenue Admistrator Madam Beatrice Memo on her part said the targets set by the Agency coupled with regular appraisals for each revenue collector and continuos ranking of the Sub-Counties has improved responsibility among the officers.

Madam Memo took the delegation through overview and history of the Revenue Agency.