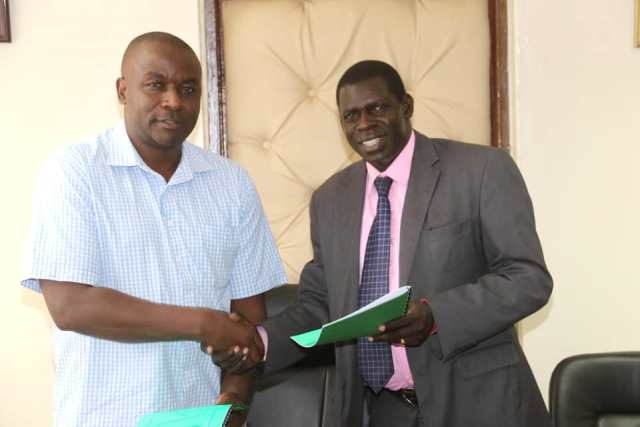 The County Government of Kakamega has signed a sponsorship deal with Kakamega based Kenya Premier League side Kakamega Homeboyz valued at Shs. 15m annually.

The deal was announced today by CECM for Social Services, Youths, Sports and Culture, Hon. Robert Makhanu at the county headquarters in the presence of the club’s President Mr. Cleophas Shimanyula. Hon. Makhanu said the sponsorship is in line with H.E. the Governor’s manifesto to nurture and support sports in the County. “We are now ready to roll out our sponsorship with Homeboyz after the county assembly passed the sports bill 2018,” he said.

He thanked the club’s founder for bankrolling the team’s activities despite the numerous financial challenges involved in running a team in a competitive league, adding that through his gesture, talents have been spotted, nurtured and showcased to the world. He said the club had immensely promoted the revenue of the County and created employment opportunities for Kakamega youths in accordance with Governor Oparanya’s commitment to empowering them.

The CECM said his office is working round the clock to implement the Governor’s manifesto on promotion of sports activities in the county and announced that the annual Governor’s cup that showcases volleyball, soccer for both men and and women, and netball among others will resume to give the youths a chance to showcase their talents.

Kakamega Homeboyz club President Mr. Cleophas Shimanyula thanked the county government for its decision to support the club and called on other willing sponsors to come on board.

Also in attendance was County Attorney Moses Sande and the Director of Sports James Muchiri.