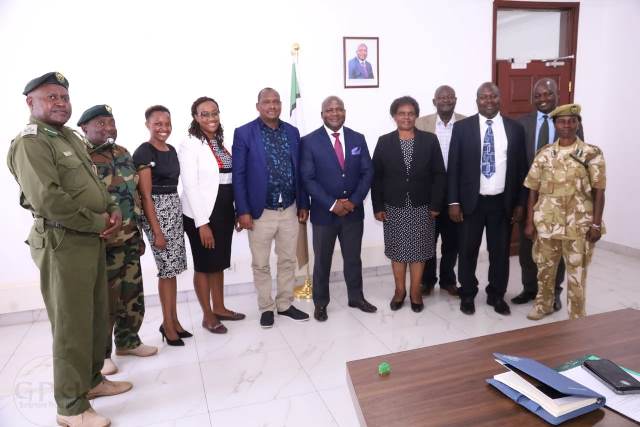 Kakamega Governor H.E. FCPA Fernandes Barasa has expressed his commitment towards supporting the conclusion of Kakamega Forest Fencing Project that was initiated by the previous administration in partnership with other key stakeholders.

The Governor was speaking on Wednesday when he hosted a delegation from National Environmental Trust Fund (NETFUND), UNDP, Kenya Forest Service (KFS), Rhino Ark Kenya and the Kenya Wildlife Service (KWS) in his boardroom at the county headquarters.

The project, Governor Barasa explained, will go a long way in protecting the only remaining tropical rainforest in Kenya and it’s ecosystem; and invited more partners to support the initiative.

The Governor regretted that the uniqueness of the forest has neither been properly recognized nor utilized and promised to lobby for more support from the Council of Governors (CoG).

“As we roll out the project remember to involve the local community so that they be part of the process; further efforts should now be directed towards reaforestation,” advised the Governor and announced that he will be leading the County on a tree planting exercise at the forest this Friday.

NETFUND Chief Executive Officer (CEO) Samson Toniok disclosed that Ksh 13 Million has been set aside to be spend on other conservation efforts targeting community development such as seedling purchase and planting.

Mr. Toniok also said other activities towards raising funds for the project such as soccer and rugby matches, bike racing and marathon will be considered by the partners.