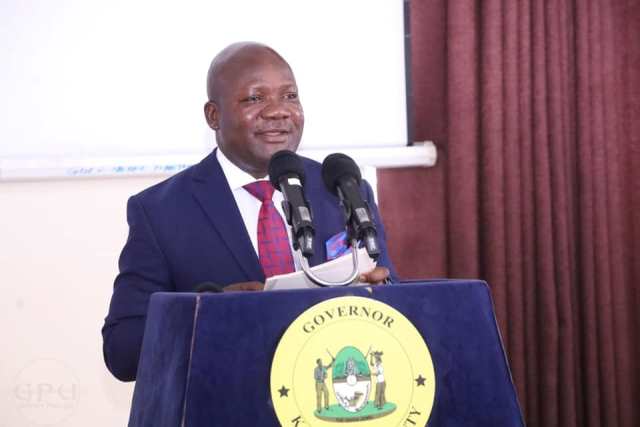 The County Government of Kakamega will put in place proper mechanisms to enhance collection of own source revenue in order to realize the much awaited development agenda by the people. This was announced by the Governor H.E. FCPA Fernandes Barasa during a consultative meeting on the County Budget Review and Outlook Paper (CBROP) Wednesday at Golf hotel in Kakamega town.

To that effect, the Governor has directed the County Executive Committee Member (CECM) for Public Service and County Administration to give special attention to the Kakamega County Revenue Agency (KCRA) to enable the Agency discharge its mandate effectively.

He commended KCRA for raising Ksh 1.2 billion as own source revenue in the Financial Year 2021/22 despite the adverse economic effects of Covid-19 pandemic, but challenged the Agency to meet the new set target of Ksh 1.6 billion registering higher expectations of the Agency by the Government.

“I further direct the County Audit Unit to urgently submit the latest audit report of the Agency to my office before closure of business today,” the Governor asserted as he called for synergy among all stakeholders to effectively achieve the set targets.

Governor Barasa noted that the County will allocate more resources on Development expenditure to ensure an increase in production and economic growth of the County.

FCPA Barasa, the Chairman of the Finance Committee at the Council of Governors (CoG), noted that he will push for more revenue to the counties to expedite development in the devolved units.

“As we revamp our own source revenue collection, maximum attention should also be given to project implementation where l expect the Service Delivery and Advisory Unit to come up with a reporting template on all County projects for uniformity,” the Governor directed and called for efficiency in management of government contracts based on the agreed budget and timelines.

He used the opportunity, being his maiden official address to Senior staff and non-state actors, to thank them for believing in him as their Governor and promised to fulfill his promises to the residents of Kakamega County.

“We will work closely with our colleagues of the County Assembly by developing a capacity building framework for them to make sure they discharge their Oversight, Legislation and Representation roles effectively,” the Governor said.

Deputy Governor H.E. Hon. Ayub Savula on his part asked the Executives to strictly adhere to the directives of H.E. the Governor terming the latter’s wealth of experience in finance management as key towards realization of the County’s development agenda.

Hon. Savula also emphasized on the need for the Executive to work towards implementing the Governor’s manifesto from onset in close cooperation with the County Assembly.