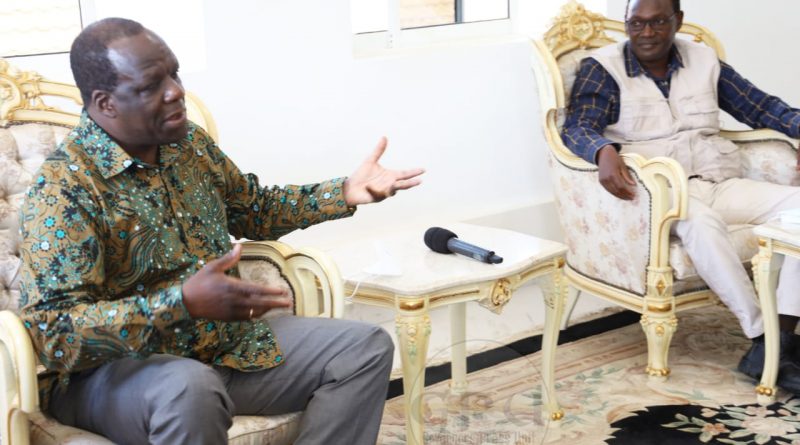 Governor Dr Wycliffe Oparanya has said his Government will support the initiative by the National Government to plant trees to achieve 10% tree cover by 2022.

He said he supports the tree planting project by the Ministry of Environment and Forestry.

Speaking in his office during a courtesy call by Mr Chris Kiptoo, Principal Secretary in the State Department of Environment and Forestry, the Governor said his Government has already pumped Ksh 5 million in greening programme which targets to plant more trees in the County, a programme that is being implemented by women, youths and people with disabilities.

He asked the PS to fast track the process of fencing Kakamega forest which is the only surviving tropical forest in the Country.

“We have allocated Ksh 25 million for the fencing of Kakamega forest and I urge you to engage the relevant Government agencies to enable us commence this exercise immediately,” he said.

He noted that an NGO had agreed to partner with the County to implement the project by injecting Ksh 156 million in the project.

He also said Vihiga County which borders the forest also agreed to allocate Ksh 10 million for the fencing project.

“We want to fence the entire forest in four phases. The project will cover 240 kilometers around the forest,” Dr Oparanya said.

He said the National Government is committed to working with the County Governments to achieve the 10% tree cover by 2022.

“The President will be rolling out the programme later this year. We want to establish a tree growing fund to support youths and women to cushion them economically during the post Covid-19 period,” said Kiptoo.

“There is need to educate people on the importance of planting trees. They should plant trees even in their homes,” said Prof Kutima.