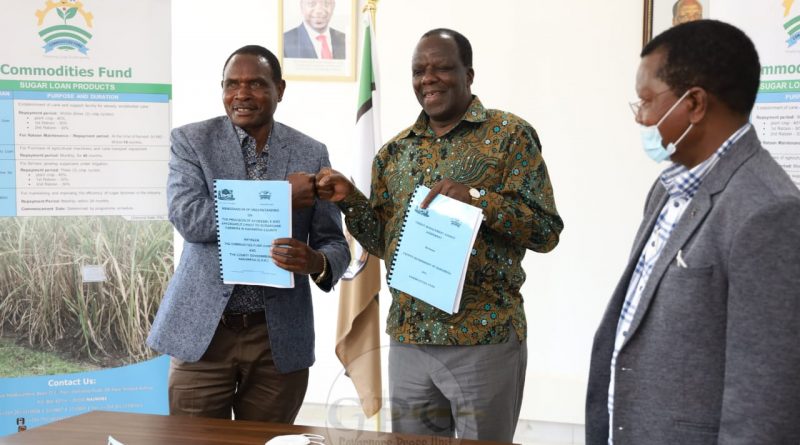 The County Government of Kakamega has entered into a partnership with Commodities Fund to finance the sugar sector in the County. The partnership was witnessed by Kakamega Governor H.E Dr. FCPA Wycliffe Ambetsa Oparanya and the Fund’s Board of Trustees Chairman Hon. Samson Okioma Mwancha at the Kakamega headquarters.In the Memorandum of Understanding (MoU) signed by representatives from both parties, Commodities Fund will manage Kakamega’s cane development revolving fund that is aimed at supporting sugarcane farmers who will be able to borrow money from the fund at affordable rates to enhance sugar productivity.Commodities Fund is a Government agency formed by Crops Act, 2013, mandated with funding the Agricultural sector through easily accessible loans.Addressing the press during the event, Governor Oparanya regretted that the collapse of Mumias Sugar Company, the largest sugar miller in Kenya, has affected the economy of Kakamega County, Lake Region Economic Bloc and the entire country. “90 percent of our residents depend on Agriculture. As a Government we have a duty to support farmers who want to engage in sugarcane growing as we work towards reviving Mumias Sugar Company and supporting other existing sugar millers in the county. This MoU will ensure sustainability in sugar development in Kakamega County through affordable financial lending to farmers,’’ he said. The County Government has already set aside Shs50 million towards the initiative. The Governor noted with regrets that during his first term in office, his administration introduced the same initiative where the Government injected Shs 200 million in the sugar sector to support farmers, a matter that attracted unnecessary attention. “Due to the politics that came up when we tried supporting sugarcane farmers a while back, we have decided to engage a Government agency under the Ministry of Agriculture that will manage these funds for us,’’ Dr. Oparanya said.The Governor further announced that the County Government intends to increase the fund from Shs50 million to Shs300 million depending on how the lender will have spend the initial allocation. The interests of the residents, he noted, have to be safeguarded by prudent utilisation of finances and proper accountability.The County boss also used the opportunity to reveal that three prospective investors have already shown interest in investing in Mumias Sugar company and exuded confidence that one of the three will be picked to establish operations at the ailing firm.Hon. Samson Okioma commended Governor Oparanya for initiating the process that will be key in developing cane in anticipation of the revival of the Mumias based sugar miller.He acknowledged the willingness of the Agency to support farmers resuscitate Mumias Sugar company adding that Commodities Fund is currently lending several private sugar millers such as Sukari, West Kenya, Kwale and Butali among others.Also in attendance were Kakamega Deputy Governor H.E Prof. Philip Museve Kutima, Kakamega CECM for Agriculture Madam Rachel Okumu, County Secretary and Head of Public Service Madam Jacinta Aluoch Odhiambo, Managing Trustee Ms Nancy Cheruiyot, Chief Officer Mr. Jeremiah Namunyu and the Ag. County Attorney Vivianne Mmbaka among others.