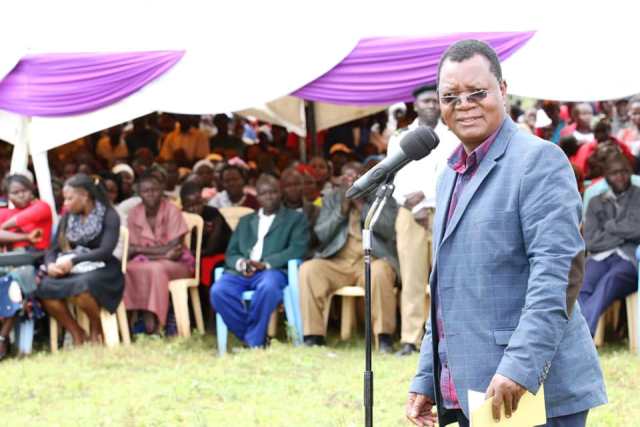 Kakamega deputy governor H.E. Prof. Philip Museve Kutima today joined the family, relatives and friends of the late Lavender and Patience Mangeti at Epanja village, Malaha Isongo ward, Mumias East sub county, 15 and 12 year old girls respectively, who were swept by water after a bridge they were crossing along River Lusumu caved in. A third child, Sandra, kept afloat by hanging onto a tree branch until rescuers arrived at the scene.

The deputy governor who also passed H.E. Governor Wycliffe Ambetsa Oparanya’s condolences thanked members of the community for the quick response that saved one girl as well as the retrieval mission for the two other bodies. He announced that the county government of Kakamega will, through the County Disaster Management Unit, offer training opportunities to youths from various regions across the county in diving courses as a measure of disaster preparedness. “The county will also look into the possibility of incorporating the young men who saved the life of the sole survivor into the County Youths Service Empowerement Programme as a way of honouring such heroic acts,” he said.

He assured the residents that the bridge which had been put up by the national government through the CDF kitty, will be put under consideration for construction by the county government.

Speaker after speaker including the CECM for Trade, Tourism & Industrialization Mr. Kassim Were lauded efforts by the county Disaster Technical Committee that ensured retrieval of the two bodies. Mr. Were also announced that Mumias East sub county will soon be witnessing the launch of a Waste Management plant at Mung’ang’a by the county government as a way of creating employment for the youths.