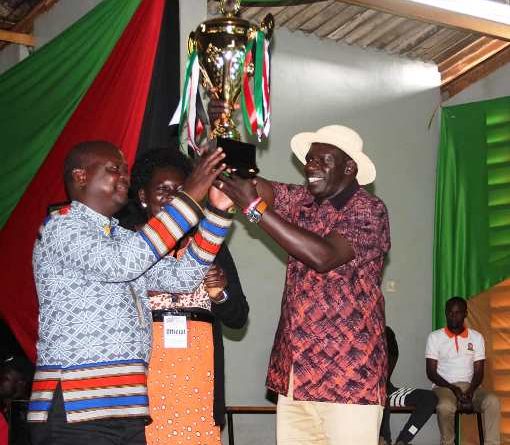 Kakamega county will go down in the history books of the Kenya National Music & Cultural Festivals for successfully defending the national title won last year in Meru county in addition to winning the title 7 years in a row. The county now retains the trophy, a second time, after similar exploits in 2013.

Siaya county governor H.E. Cornel Rasanga who closed the festival officially today congratulated the winners and thanked all the particiapants for honouring this year’s event. He said the competitions have showcased massive talent from various regions and counties across the country as well as government institutions. “Just like the theme of this festival states, we should use our rich cultural practices and music to promote cohesion and peace in our nation especially among the youths and the political class,” he said.

Kakamega county CECM for Social Services, Youths, Sports and Culture Hon. Robert Makhanu echoed the governor’s remarks on using the festivals as a vehicle to champion for peace and reconcilliation among communities. He used the platform to also pass H.E. governor Wycliffe Ambetsa Oparanya’s best wishes to the winners and urged the organizers’ to invite H.E. the President Uhuru Kenyatta to grace the next event in his capacity as the patron.

This year’s competitions saw the introduction of a new category namely “Informercials” that gives counties an opportunity to showcase and tell their story by way of a documentary not exceeding 5 mins.

The coastal county of Kwale who also lifted the Most Improved county trophy finished in the second position ahead of Uasin Gishu county who were the 2nd runners up. Hosts Siaya and Mombasa counties were position 4 and 5 respectively.