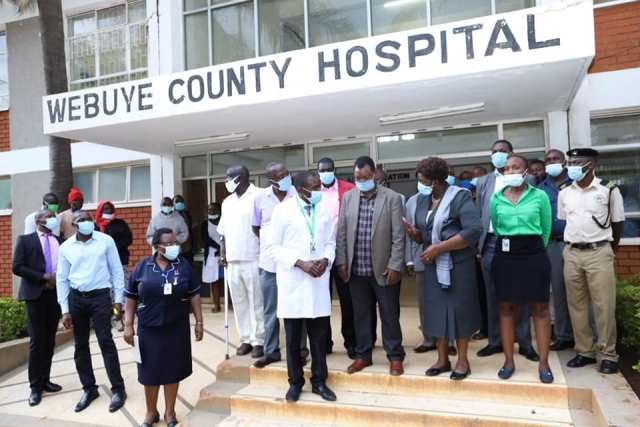 The County Government of Kakamega has cleared medical expenses for the hospitalized Kaburengu junction accident victims. On Monday, a Webuye bound trailer lost control and ploughed into roadside traders killing eight people and injuring 14 others. The latter are recuperating at Webuye County Hospital.

Kakamega Deputy Governor Prof. Philip Museve Kutima Wednesday evening, in the presence of other senior government officers, handed Shs 85,000 to each family of the eight who lost their lives in the tragedy to support them in funeral arrangements. He also gave Shs 30,000 to each of the hospitalized patients to offset their medical bills.

“We are here to stand with the affected families on behalf of H.E Governor Wycliffe Oparanya and the entire County Government. Nothing can bring back the dear lives of those we lost, not even this gesture, but this is just to let you know that we care for your well being,” Prof Kutima said.

He asked the traders to move away from the roadside and occupy the free space within the interchange temporarily as the Government looks into the matter.

Prof. Kutima announced that the county is in the process of finding a piece of land within the area to purchase for construction of an open air market and a bus park for public service vehicles as a long lasting solution.

“We will also work closely with the National Government to ensure this road is completed on time so that we can resettle the traders to a safer place,” he said. He hailed the cooperation between the two neighnouring counties of Bungoma and Kakamega County that saw the victims attended to well at the Bungoma facility.

He was accompanied by CECMs led by Ag CECM for Public Service and Administration Dr. Beatrice Sabana, Members of County Assembly, Chief of Staff Mr. Robert Sumbi and Lugari sub county administrator Geoffrey Lumbasi among other senior government officers from both levels of government.