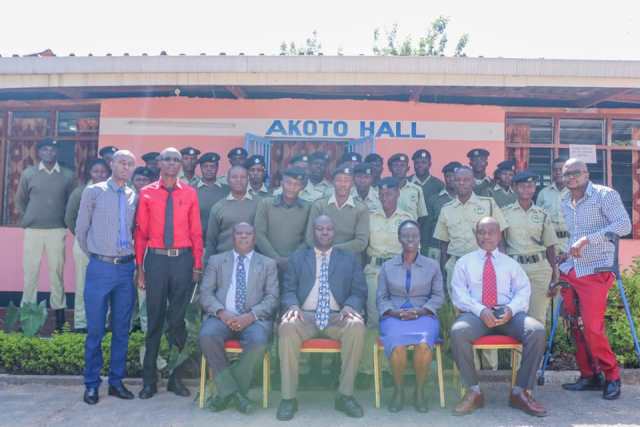 Select County Enforcement officers from sub counties and the two municipalities of Kakamega and Mumias today attended a one-day capacity building workshop on control of alcoholic drinks and other challenges associated with liquor and other substance abuse.

The workshop organized by the Ministry of Public Service and Administration through the Directorate of Alcoholic Drinks Control saw the officers also trained on; identification and handling of counterfeit and contraband goods as well handling the challenges emerging from alcoholic drinks.

Head of Administration Mr. Wilson Yaola Sifuna who opened the event on behalf of the CECM for Public Service and Administration Dr. Beatrice Sabana said the enforcement unit which falls under the ministry is a key entity in taming rampant alcohol abuse through strict enforcement systems. “All of us in this room are affected in one way or another by alcoholism thus the need to stop this vice by enforcing the law to the letter,” he said as he called on the officers to observe high levels of integrity and professionalism.

The Ag. Head of the Directorate of Alcoholic Drinks Control Mr. Benson Ochomo said the officers were the main enforcers of government policies at the grassroot level hence the need to empower them with their obligations while enforcing the law. “We are also collaborating with the National Police Service to ensure the aspects of Time (drinking hours), Quality of Liquor and Prompt payment for those licensed are adhered to in accordance with the laid down rules and regulations,’’ he said. The directorate is keen to; curb alcoholism, drugs and substance abuse, reign in on tax defaulters and cease the spread of counterfeit and contraband alcoholic drinks. Other subsequent trainings for the enforcement officers, Mr. Ochomo said, will involve the offices of the National Police Service and the Kenya Bureau of Standards (KEBS).

Senior officers from the National Agency for the Campaign Against Drug Abuse (NACADA) and the National Anti-Counterfeit Authority led by the regional manager of NACADA Sarah Kosgey also delivered keynote presentations during the workshop.

Also present were the Ag. Head of Enforcement Mr. Baraza Otunga, Mr. Samwel Wamukoya a Principal Administrator in the directorate, Administrative officer Mr. Jeremiah Buliba and other officers from the ministry.