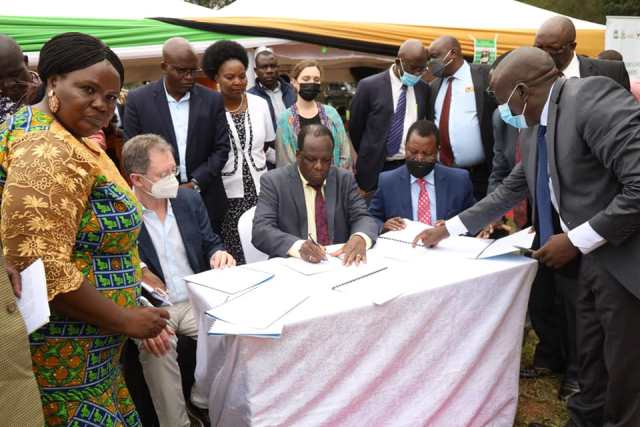 Kakamega County will partner with Ukulima Sacco to support public servants acquire houses that will be constructed under the Sh6 billion Affordable Housing scheme in Kakamega Municipality.

Kakamega County Governor H.E Dr. FCPA Wycliffe Oparanya revealed that the County will work with the Sacco under the latter’s Makao Home Plan to fund Government officers interested in buying units once the ambitious housing programme being undertaken under the Public Private Partnership is completed.

The County boss made the remarks when he officially opened Ukulima Sacco, Kakamega branch at Agricultural Finance Corporation House in Kakamega, Tuesday making it the newest kid on the block for the financial institution.

The Governor commended Ukulima Sacco for choosing Kakamega County as their investment destination saying that the steadily growing economy in the rural municipality is attracting so many investors. He added that the Sacco which has grown to be a giant cooperative society will be a key enabler of development in the County and assured them of the County Government’s support.

“I am aware that the Sacco’s asset base has grown to Sh13 billion, deposit rate reached Sh9 billion and loan uptake Sh11 billion; this has made the Sacco a multibillion financial institution that will greatly supplement the support the county is offering farmers,” he said.

“Diversify and accommodate both salaried and non-salaried members for their growth and stability,” the Governor advised urging County staff to join the Sacco so that they can be able to acquire both long and short term loans for investment and/or any other financial needs.

He called on the management to reach out to residents through their outreach programmes with a view of attracting them to join the financial institution.

The event was also attended by the Principal Secretary State Department for Co-operatives Mr. Ali Noor Ismail and other senior Government officers.

Meanwhile, farmers drawn from all the 12 Sub-Counties Tuesday converged at Bukura Agricultural Training Centre in Lurambi to mark Kakamega County’s Governor’s Day with Farmers’ that was marked today at the renowned institution where they interacted with key policy makers at the County level led by H.E the Governor. During the meeting, farmers gave their contributions, on matters promotion of agriculture, which are expected to be incorporated into the subsequent County Integrated Development Plan (CIDP).