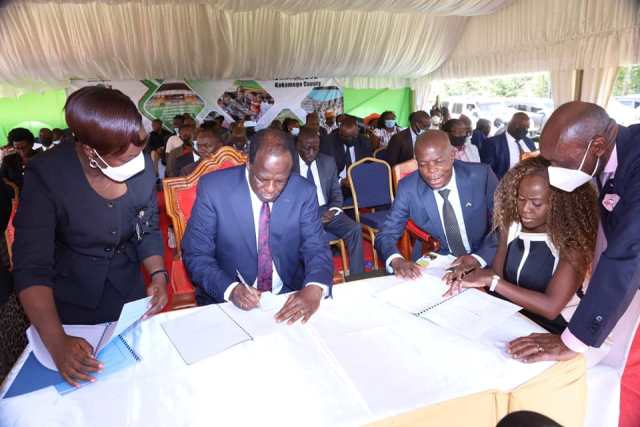 The company has a 10 megawatts power generation license for Kakamega County granted by the Ministry of Energy and Petroleum.

Speaking during the event, Governor Oparanya said the plant is expected to employ hundreds of residents on permanent basis and many more on casual terms, once operational. In addition, he noted, the project will also help in protecting the environment.

“This plant will contribute to cheaper sources of energy for residents of Mumias and Kakamega as a whole; we look forward to minimizing waterborne diseases arising from solid waste” he explained adding that waste from the entire Lake Region Economic Bloc will be used by the factory as raw material. Currently Kakamega has two designated open waste disposal sites; Roasterman and Matawa dumpsites which are overwhelmed due to the rising numbers of urban dwellers in the County.

In anticipation to the project, the County Government has purchased a modern refuse truck to transport waste from transfer stations to the Waste to Energy facility.

“The main output will be electricity that will be delivered to the National Grid; additionally, the plant will generate ash which can be used in brick or cement industry or the infrastructure construction,” Governor Oparanya explained.

As part of Corporate Social Responsibility activities, the investor will construct a health facility and an ECDE block to benefit the locals.

The Investor, Mrs. Victoria Rickede, said her company will invest 70 million US Dollars in the project that is expected to generate 10 megawatts power in the first phase.

The groundbreaking ceremony was also attended by senior Government officers from both levels of Government.