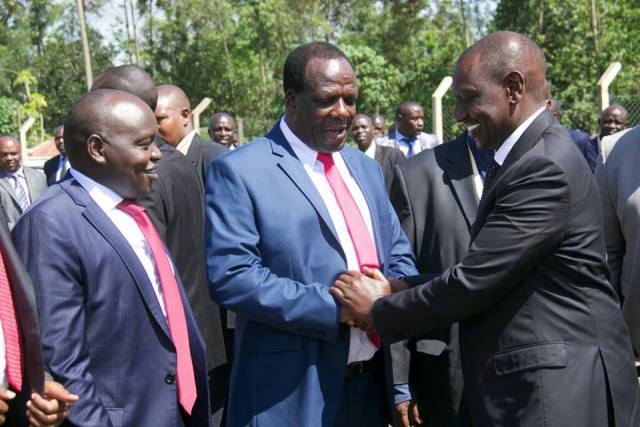 DEPUTY President H.E William Samoei Ruto has called on leaders to shelve their calls for an expanded executive and instead strategize on how to empower counties for the sake of devolution.

Speaking during the third and final day of the fifth devolution conference in Kakamega, the Deputy President said current discussions of holding a referendum to create more positions to accommodate other leaders in the executive were not in the best interest of the country considering the huge amount of funds involved with the process.

Hon. Ruto congratulated Kakamega County Governor H.E Wycliffe Oparanya for his proactivenes in safeguarding the assests and liabilities of the government as required by law. He challenged other counties to act with speed also and have all their assets documented. The Deputy President noted the numerous achievements by counties citing projects such as the 750 bed capacity Kakamega County Teaching and Referral Hospital that is under construction by the County government of Kakamega and the Turkana county irrigation project as some of the notable milestones achieved by devolution.

KAKAMEGA Governor H.E Wycliffe Ambetsa Oparanya thanked the Deputy President for gracing the event and urged him to support a faster release of funds by the national government to counties. The Governor said disbursement of funds on time will improve service delivery in counties. He thanked all stakeholders for finding time to attend the event and reiterated his earlier statement that indeed the fifth devolution conference has been harmoniously conducted as compared to the past ones which were bedevilled by side shows among essential stakeholders. Governor Oparanya urged county governments to work together with the national government to achieve the Big Four agenda.

The Fifth Devolution Conference held at Kakamega School, Kakamega County has been termed as the most successful one of the past conferences by the Cabinet Secretary for Devolution Hon. Eugene Wamalwa and other important stakeholders.