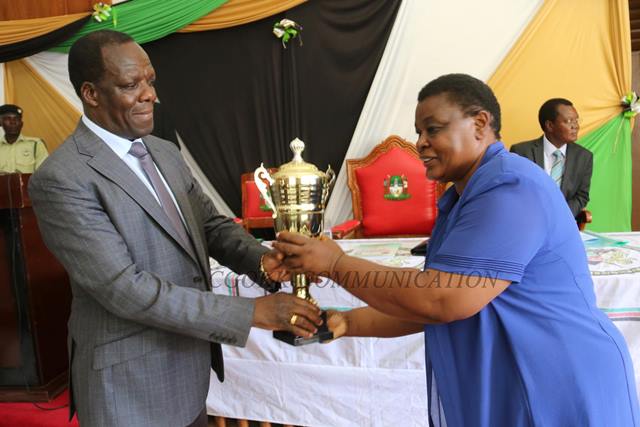 The County Government of Kakamega today released the 2015/16 performance report for its Government ministries and departments.
The function attended by Governor Wycliffe Ambetsa Oparanya also witnessed the various government units sign the 2016/17 performance contracts through their respective CECM’s, Chief Officers and Heads of Departments. Performance Contracting is aimed at assisting the county government improve service delivery.

Governor Oparanya lauded efforts by the performance contracting experts led by Dr. Henry Wati in ensuring government officers discharge duties and mandate as guided by the 2013/17 County Integrated Development Plan (CIDP) of Kakamega County,the Governor’s manifesto to the residents and the budget. He challenged employees to work without supervision and encouraged them to work past the government provided working hours saying only that would ensure the various tasks assigned are completed on time for efficiency in service delivery to the residents.

Deputy Governor H.E Prof. Philip Kutima called on government employees to ensure their reports are submitted on time for evaluation as it was the only parameter to rate how the various units were performing.

Others present were CEC Members, Chief Officers, Members of the Public Service Board, Heads of Departments and government employees from the various ministries and units.