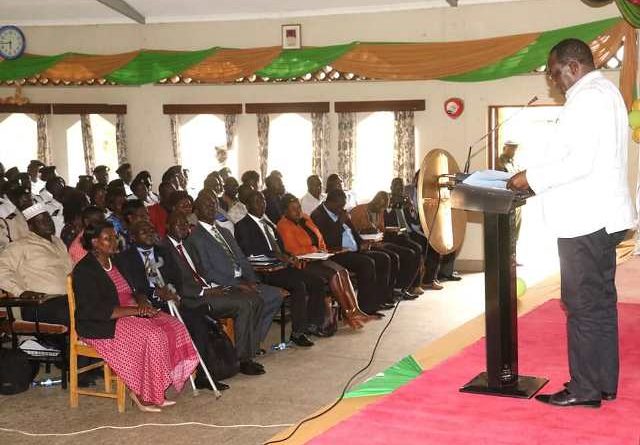 Kakamega governor and CoG chair, H.E. Wycliffe Ambetsa Oparanya has said governments are established to deliver services to citizens and not to do business and make profit.

The governor who was addressing hundreds of the newly recruited Community Area Administrators during an induction programme at Bishop Stam conference facility in Kakamega town called on the Administrators to familiarize themselves with the National and County laws, policies and expectations of the citizens based on the CIDP, the governor’s manifesto and Annual Development Plans.

“Everyone must meet performance targets and observe discipline, décorum and protocol in line with public service work ethic,” he said.

In 2013, the newly devolved unit inherited 1,200 employees from local authorities and the number has increased to 6,000, seven thousand short of the County’s optimal establishment.

He said administrators were important pillars in service delivery as they played a key role in coordination and supersion of services at the grassroot level. He urged them to focus on the County government’s current priorities in provision of water to households and electricity connectivity in rural areas. He also said County youth service and women empowerment programme was number 3 in the order of priorities followed by estblishment of Community Councils to entrench public participation as envisaged in the Kenya Constitution.

The Deputy Governor said it was gratifying to note the great strides the County government had made in establishment of a properly structured administration right up to community areas.

On her part, the CECM for Public Service and Administration, Dr. Beatrice Sabana said Kakamega County is now a powerful brand that should be sustained through hard work and discipline.

All departments through Chief Officers made short presentations on their respective key projects that require the support of Community Administrators _”mashinani”._

Also present were CECMS, the County Secretary and Head of Public Service, the Chief of Staff, PA to the Governor, advisors, sub county and ward administrators.