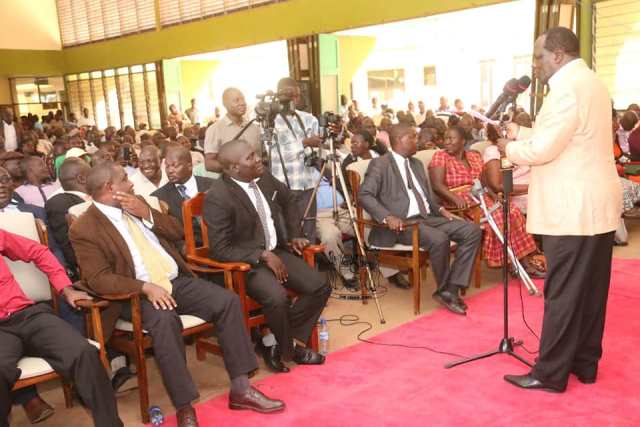 Kakamega Governor H.E. Wycliffe Ambetsa Oparanya has said the revival of Mumias sugar factory was one of his priorities in strengthening the economy of the county.

The Governor who is the co-chair of the National Sugar Taskforce said the current crisis facing sugarcane farming was caused by mismanagement of public sugar millers resulting in disorder in the industry and bankruptcies in the farming community. He made the remarks today when he led members of the taskforce in a public participation session with stakeholders at Mumias Complex Hall.

He confirmed that the national government had released Shs 1.9 billion to settle outstanding payments for cane deliveries to public millers. The outstanding Shs 808 million will be paid shortly, he said.

Most of the views from the public zeroed on the causes of the current sugarcane woes and measures required to bail out the ailing sugar sector with the key issues highlighted as follows:

▪Halting sugar imports
▪Urgent measures to revive Mumias Sugar under the leadership and direction of a special committee
▪Reinstatement of the Sugar Development Levy
▪Restructuring the shareholding in public sugar companies to allow representation of farmers and the County government.
▪Review of the sugar pricing policy
▪Revamping of the management of Mumias Sugar Company to stamp out inefficiency and corruption
▪Freedom for farmers to sell their cane to factories that have capacity to pay
▪Need for subsidies for cane development and transport
▪Sensitization of farmers on harvesting of mature cane

Elsewhere, Kakamega County Deputy Governor H.E. Philip Museve Kutima has advised residents of Ikolomani and Butere sub counties and Kakamega County as a whole to stop consuming dead animal meat before inspection by veterinary officers. This follows reports that one person died and about 30 others are hospitalised after eating meat from animal that died of anthrax disease at Ivonda in Ikolomani sub county.

The deputy governor who is also the County CECM for Agriculture, Livestock, Fisheries, Veterinary and Cooperatives was speaking at Mumbetsa, Ikolomani sub county during an animal vaccination exercise against Anthrax and Black quarter diseases in cows as well rabies in dogs. The exercise is being carried out in the entire county and targets elimination of foot and mouth, lumpy skin, anthrax and black quarter diseases in cattle as well as rabies in dogs and cats. Prof. Kutima called on residents whose animals die of anthrax disease to ensure they dispose the remains in a 10ft trench to prevent the anthrax causing bacteria from spreading further to human beings and animals. He used the opportunity to call on farmers to register in numbers for the county government funded top dressing fertilizer at a subsidized cost, half the market price.

The two leaders were accompanied by senior government officials from both levels of government.