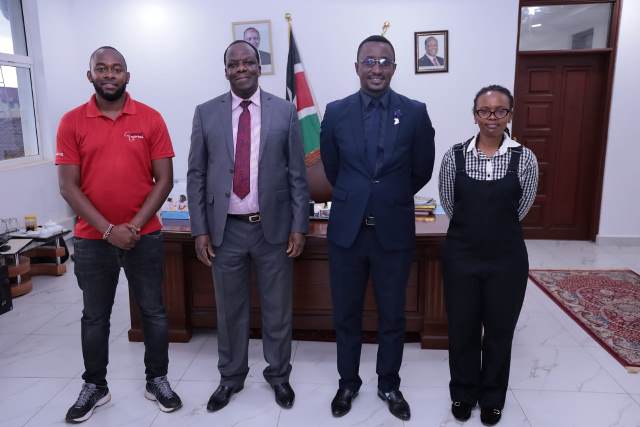 Governor H.E Dr Wycliffe Oparanya held a meeting with a team from AMREF to discuss Universal Healthcare Coverage (UHC) in the County.

The County Government and AMREF have partnered to conduct mapping of the poor under the Social Economic Mapping to identify beneficiaries of the UHC programme.

The exercise was ongoing under the County Government and AMREF came in to beef up the process.

“I held a meeting with a team from AMREF on the the progress we have made on identifying and putting vulnerable families on the health care under UHC programme. I thanked AMREF for their support towards making the programme successful by ensuring transparency in identifying deserved cases,” said Governor Oparanya.

AMREF team was led by Mr Billy Olwenda who is in charge of the Social Economic Survey programme.

The Governor said he is aware that AMREF has already done mapping of 84,846 poor families out of which 35,799 qualify for the programme because of their desperate status.

AMREF also train County CHVs on how to scientifically identify poor families to be put under the programme.

“Their data is used by my Government to support the vulnerable through various programmes like supply of farm inputs where 24,000 poor farmers benefitted from free fertilizer and maize seeds supplied to them this planting season,” he said.

He asked AMREF to consider Kakamega County for more partnerships geared towards supporting the poor.