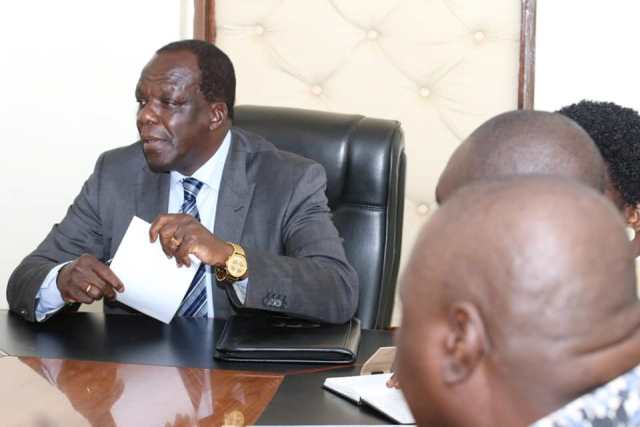 Kakamega governor. H.E. FCPA Wycliffe Ambetsa Oparanya has called for
strict adherence to rules and regulations set up by the county government for all Public Service Vehicles (PSVs) operating within Kakamega town as well as vehicles operating privately such as Taxis,
Lorries and Pick ups.

Speaking during a meeting with leaders of Kakamega Matatu SACCOs at the County headquarters offices, Governor Oparanya said the journey towards elevation of Kakamega town to a city status had taken off and every stakeholder has to support the agenda to attract mega investments into the town.

The governor said the main factors that are considered for a town to be elevated to a city were; a minimum population of 250,000 people, a proper and functional sewerage system that can sustain people and investments, a proper town spatial plan i.e operational bus termini, an industrial area and an administrative area to accommodate government offices. Others factors,
the governor said, were; good town infrastructure, a good water system to sustain the city, cleanliness – proper garbage disposal and
treatment mechanism and the general order in the town.

“Nakuru and Eldoret towns might soon be upgraded to cities and we also have to get our act together now as stakeholders to ensure Kakamega is also considered as a city when the two towns are being elevated,” he
said.

The governor said he has approached renown players in the industrial
sector and the hospitality industry across the country and beyond to
set up operations in Kakamega town but the key concern from them has been the municipality status.
“Five Star hotels can only invest here if Kakamega is elevated to city level,” he said.

The county boss announced that starting next week all matatus will be operating from the already constructed main matatu terminus and no
single one should drop or pick passengers along the roads.

He said alternative termini will be constructed for vehicles plying Kakamega-Mumias-Bungoma routes as well those plying along
Kakamega-Webuye-Eldoret/Kitale routes to ease congestion in the main terminus.

“I will not relent in my push to restore order in this town and so many culprits will be shaken off along this journey including the cartels from my office that have been licensing illegal structures around the town,” the governor said.

In the new directives by H.E. the governor
also, taxi operators will be required to acquire licences to operate
in town at one designated area in addition to donning the visible yellow line on their vehicles for order and safety of their passengers. Pick-ups and Lorries engaged in private transport business
will also be allocated space to operate from to clear the town of traffic, he said.