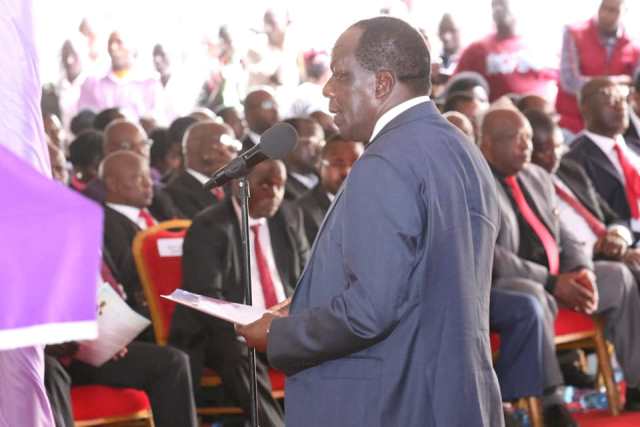 The chairman of Council of Governors (CoG), H.E. Wycliffe Ambetsa Oparanya has made an impassioned plea to President Uhuru Kenyatta to intervene and resolve the revenue sharing standoff between the Senate and the National Assembly.

Governor Oparanya was speaking at Fort Ternan, in Koru, Kisumu County during the state funeral of the late governor of Bomet Dr. Joyce Cherono Laboso.

“When we went to the Supreme Court we did not target any institution or individual for litigation. The Governors merely took the matter to court for interpretation of the law and related principles so that we can go back to serve wananchi in line with what the law provides,” he said. He regretted that as long as the impasse persists, it was counties and governors who were suffering as in the proverbial bulls fighting and crushing the grass beneath.

Most leaders strongly supported establishment of cancer fighting health facilities in most county referral hospitals and sected level 4 hospitals that are closer to the people.

The CoG Chairman, the remaining two women governors H.E. Anne Waiguru and H.E. Charity Ngilu as well as former prime minister the Rt. Hon. Raila Odinga called on Bomet Deputy Governor Hillary Barchok to pick a woman as his deputy when he assumes the position of governor next week.