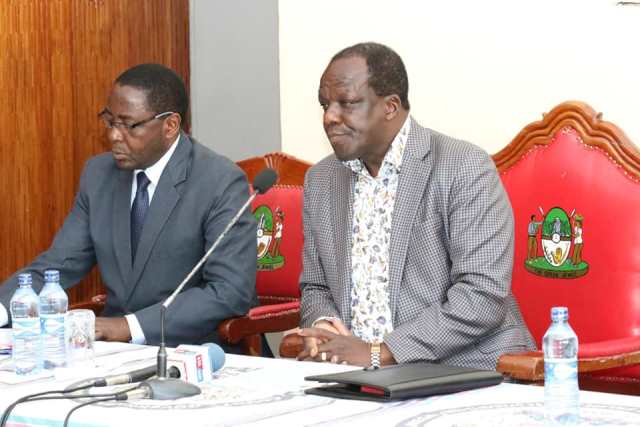 Addressing senior county executives and the media at the county chambers, governor Oparanya also directed that CEC members, chief officers as well as sub county, ward and community area administrators will take over revenue collection duties in order to avoid overdependence on the division of revenue framework between the national government and counties.

The governor assigned CECs and chief officers specific sub counties and directed them to update him on revenue collections on daily basis.

“Our objective is to ensure that we seal all leakages and increase own revenue from 5% to 10% of total shareable revenue from the national government,” he said.

He warned that corrupt individuals who feel that introduction of automated revenue collection systems in the county does not fit their personal aspirations should make an early exit from service.

“Last year we did very well in revenue collection increasing from Kshs500 million to Kshs890 million. Our target is Kshs1.5 billion,” he said.

He introduced the newly recruited Head of Kakamega Revenue Agency, Madam Beatrice Memo, a retired KRA Commissioner of Customs who has joined the County to boost revenue collection efforts.

Commenting on reports in a section of the media that he had resigned as chairman of the Lake Region Economic Bloc, the governor said the press had distorted his statement. “I’m going nowhere,” he declared, adding that he could not relinquish his post so soon after the demise of LREB vice chair, Dr. Joyce Laboso.

Governor Oparanya who was flanked by the deputy governor H.E. Prof. Philip Museve Kutima and CEC for Finance and Planning, Mr. Geoffrey Omulayi said he was in the process of restructuring his Administration to enhance service delivery.